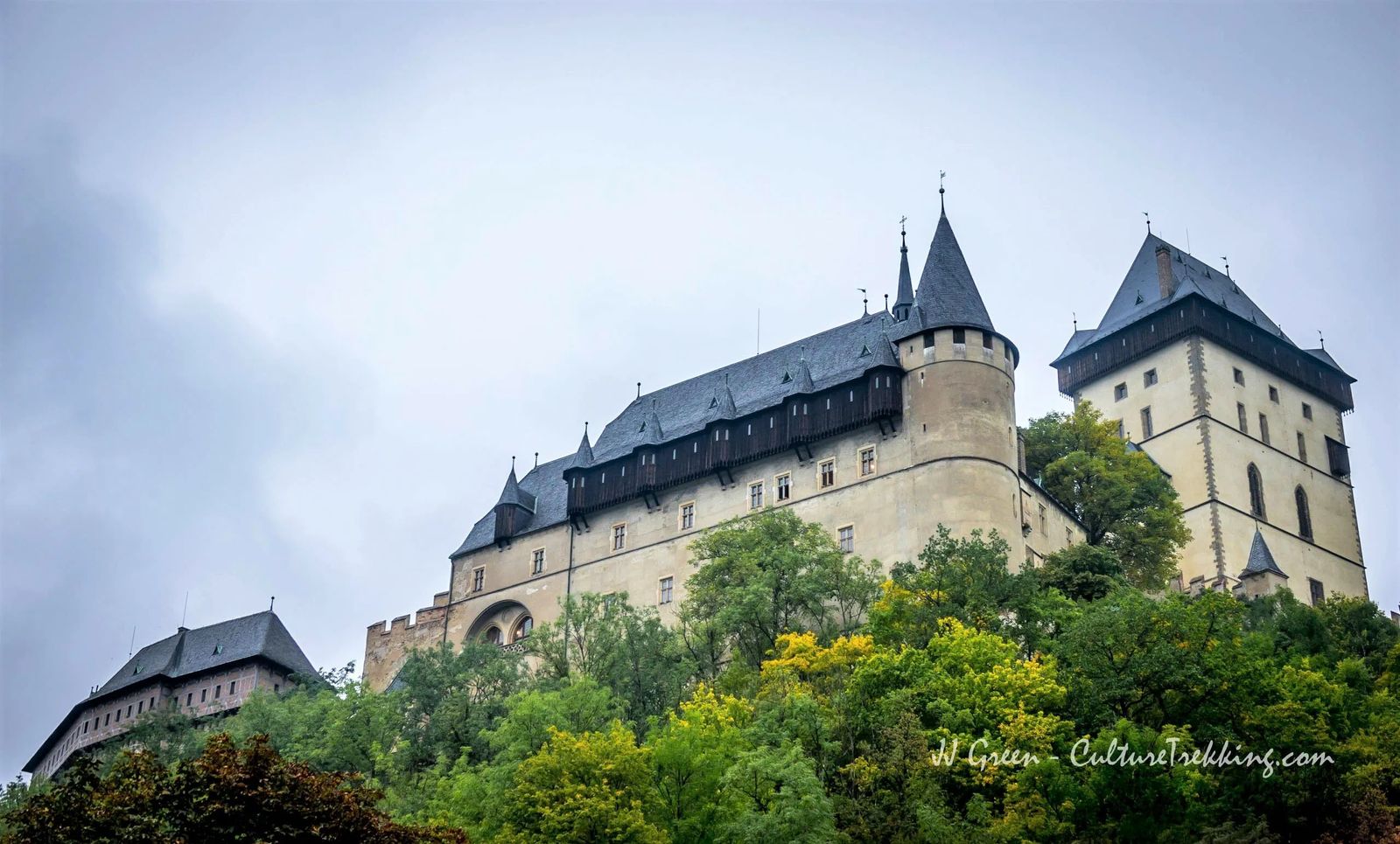 I was leaning forward in my seat, a large Czech man in the driver's seat and all I could think was 'faster, he needs to go faster'. This was with one Czech Castle I really wanted to see. It was three o'clock in the afternoon in September, and due to it being the off-season Karlstejn Castle was going to close earlier than usual. The last tour was set to be at four-thirty and it was going to take too long to get there.

Making the Choice between Karlstejn Castle and Sedlec Ossuary

It was a toss-up between Karlstejn Castle and the Sedlec Ossuary. I knew I wanted a day trip from Prague to see a unique destination in the Czech Republic. I was feeling a little nervous already from my first European Train hopscotch I would be playing the next day, so I settled for Karlstejn. I didn't want to take the chance of getting lost by getting on the wrong bus, in the wrong direction -- so I did what any American would do-- I called Uber. 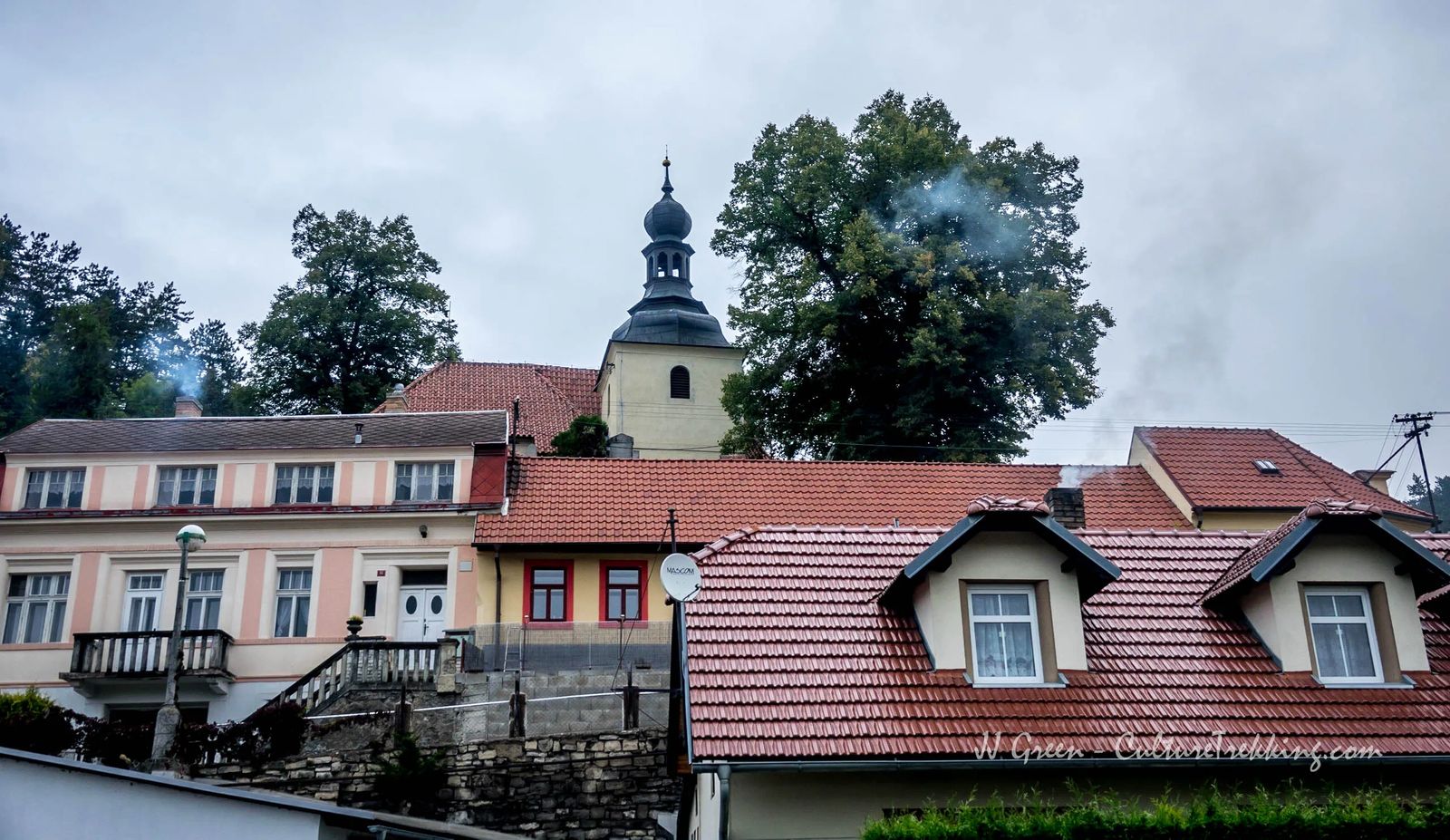 My Uber arrived, and I felt like I was climbing into a car with a Russian Bear. It was this tiny little car with this giant man with his knees about 3 inches from his chest. He spoke little English but smiled at me with his toothy smile.

It was such an odd situation, I nearly laughed, but didn't want to piss off the Russian Bear, so I choked the laughter down and climbed in. Using Google Translate when I had service, I was able to find out he was actually Czech. He was a kind sort of fellow, the type of person you want to hug when you have a hard day. He is married with 2 children that when he spoke about them (via translation) his face would light up, and his squinty eyes would disappear into his smile.

Pulled Over by the Police

He sped along as fast as he could and even drove as far into the Castle's entrance as possible. We ended up getting pulled over, which led to even further delay. When the cop started to talk to us, my stomach dropped and my conversational valley girl came out. It is always good to help your driver out by playing the ditzy American that didn't know any better. 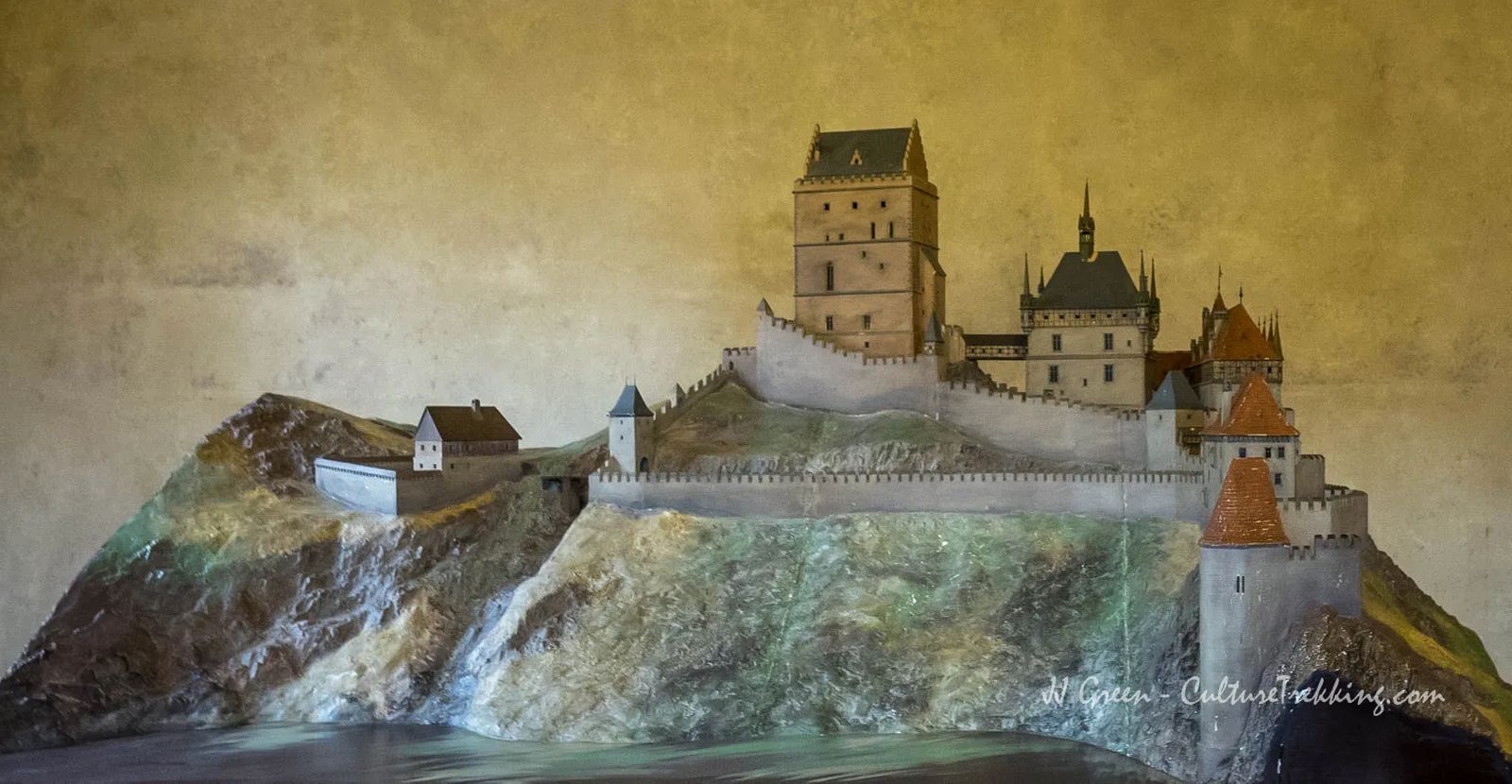 I helped to talk him out of a ticket and arranged to have him wait nearby while I toured the castle. In total, I thought this would cost me about $50 in total, but apparently, they charge by the hour if you make them wait. So make sure that you arrange something before you get into the car, because as I was in the middle of nowhere and on a time constraint.....I didn't really have a choice....darn it.

Getting to Karlstejn Castle - A Long Climb

I hopped out the car, made my arrangements with him, and turned around to a massive mountain with what looked like 500 switchbacks. Yes, I am exaggerating, but I was determined to get up to the entrance before they closed.

When researching this online, you have to know they recommend giving yourself 45 minutes to walk from town, up the long hill to the actual entrance. I did not have that kind of time....so I ran up the hill. Now you have to realize something.....I am in terrible shape at the moment, three years ago this would not have been an issue. 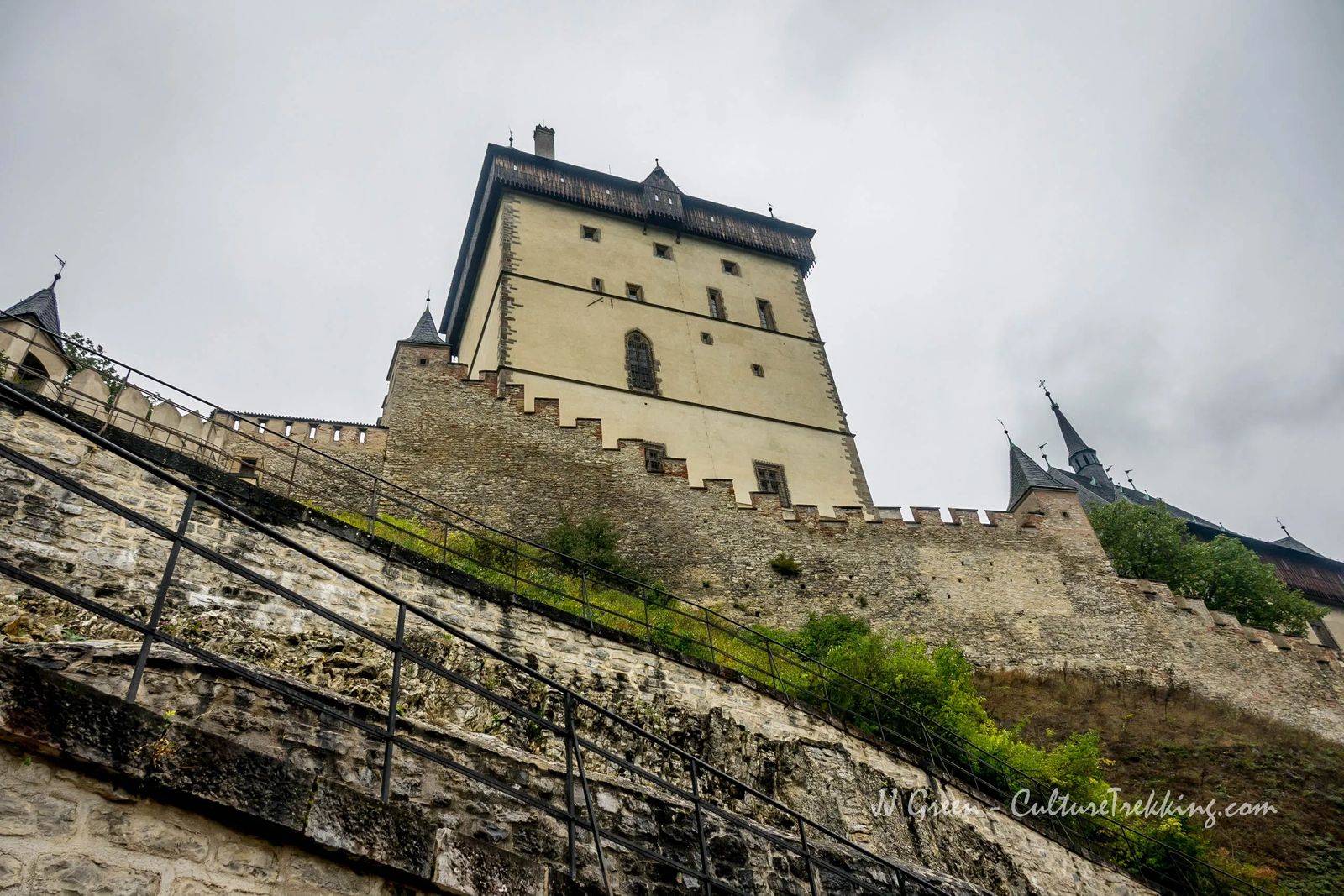 Three years ago I would tell you I could have done this uphill run in my sleep, but this day.....was not so easy. My calves and quadriceps started burning about 5 minutes into the run-up this hill. I felt like I was running but probably looked as if I was quickly waddling my way up this mountain. I started wheezing, gasping, cursing and then caught up with the family that was leisurely walking up the hill in front of me.

I felt so embarrassed about my breathless state, I think I may have attempted to hold my gasps in until I was past them. I checked my watch, groaned and went faster. I swore if they closed the gates on me, I would climb the castle walls, or start screaming until they opened the gates to tell me to shut up & then would slip in. 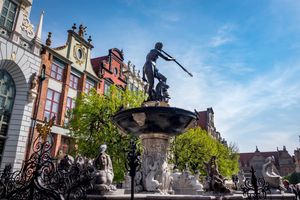 5 European Cities You Will Fall in love with

There are so many places in Europe to choose from to visit. Here are my top five European Cities you will fall completely in love with. 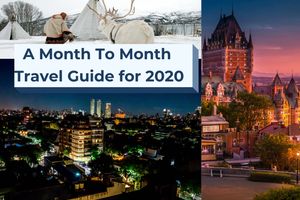 A Month by Month Travel Guide for 2020

It is hard to choose where to travel, let alone the time of year that it is best to travel there. Here are my suggestions after over two decades of traveling the world. 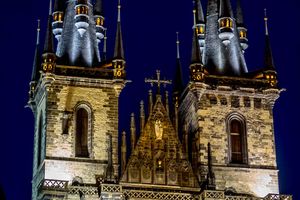 European history is full of religious battles with many dying for their faith. Prague is no exception to this, take a journey through the Prague Cathedrals. 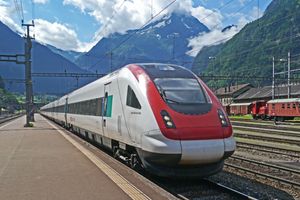 Travel by Train in Europe: My Top 15 Tips

When it is your first time traveling by train in a country that you don't speak the language, not even a lick of it, it can be extremely frustrating. Here I explain the top 15 things I wish I would ha... 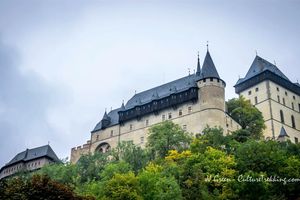 This Czech Castle looks like something straight out of a storybook I read to my nieces. Karlstejn Castle is one of those that should be on your bucket list. 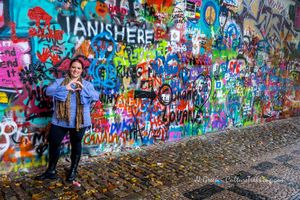 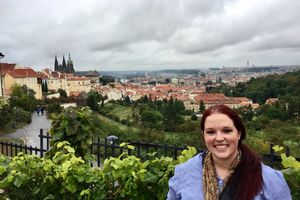 Often when you travel to a different country, there are things you don't think of researching til it is too late, such as toilets, airport transfers, can you trust the cost of the taxi, how to exchang... 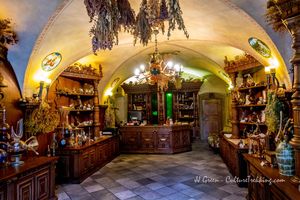 The Alchemist Museum of Prague

Have you ever wondered what Old World Medicine entailed? How they cured people without modern medicine? Addressed those Ailments? Now you can see the inner workings of all of it at the Prague Alchemis... 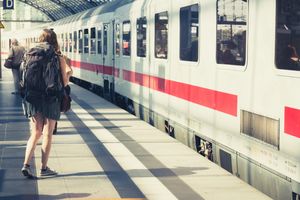 Deciding on which countries I wanted to visit and their proximity was the first step, then if it was feasible to visit them in the week and a half that I was given to do this. Choosing Eastern Europe...

Getting the Ticket to See This Storybook Czech Castle

I made the climb in 20 minutes....and walked through the gates just as the first cashier was closing her window. There was one left....I hurried over, told her I wanted one ticket & didn't care at this point what the hell she thought of my current appearance, I just wanted the damn ticket as a consolatory prize for making it up the hill that quickly. I thanked her, took my ticket, and walked over to join the last tour that started just as I was approaching. 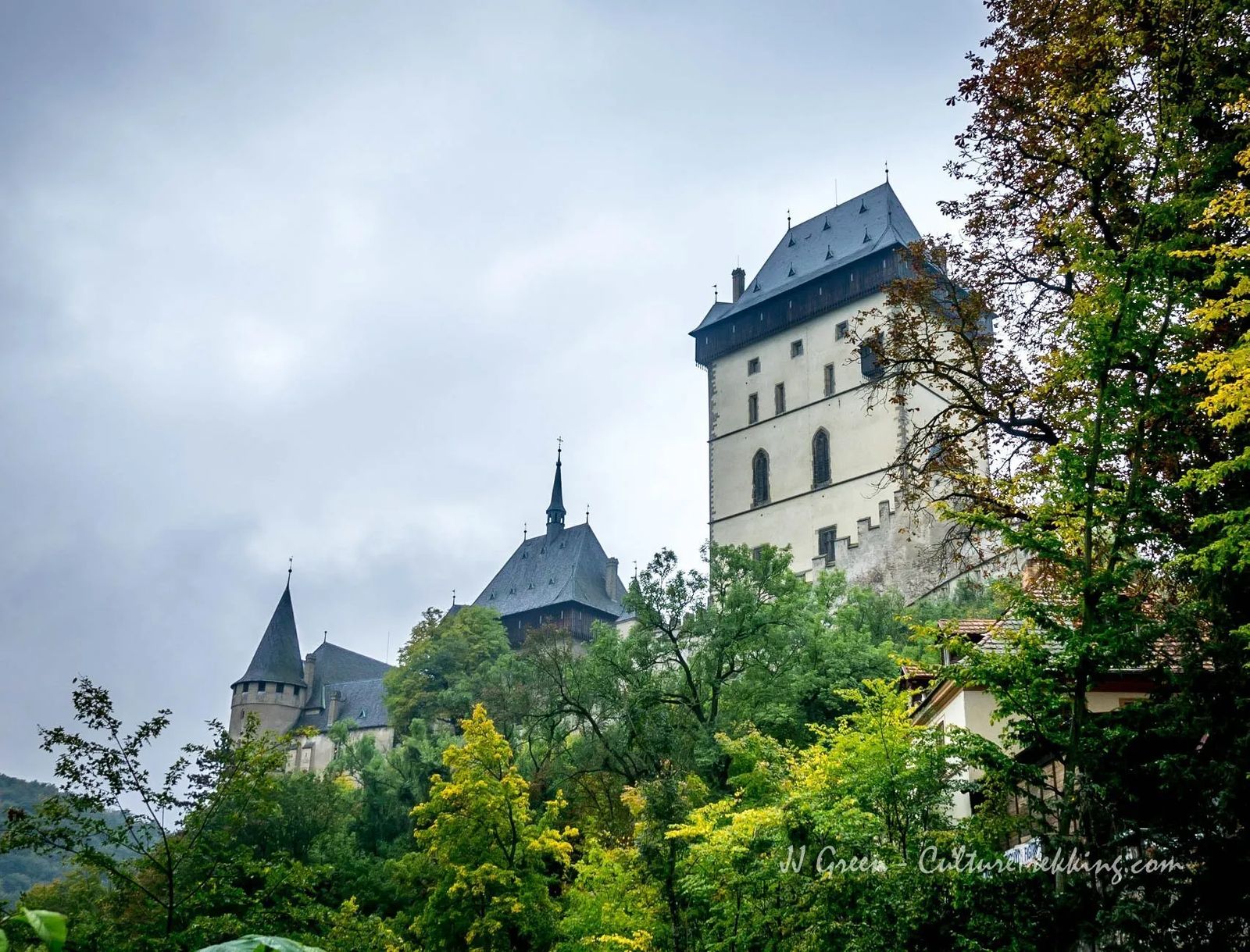 The tickets are around 300 Czk or $14 for the tour of the chapel (which is a must), or around 120 Czk around $6 for all the floors in the tower except the chapel. I was too late to do a tour of the chapel, but I hear it is inspiring. I was just grateful to be alive after coming up the hill.

The History of Karlštejn:

Our guide led us up the stairs that looked like you were climbing into heaven. I nearly crawled up the last few steps. We entered the castle and the history of the castle was intriguing and impressive. 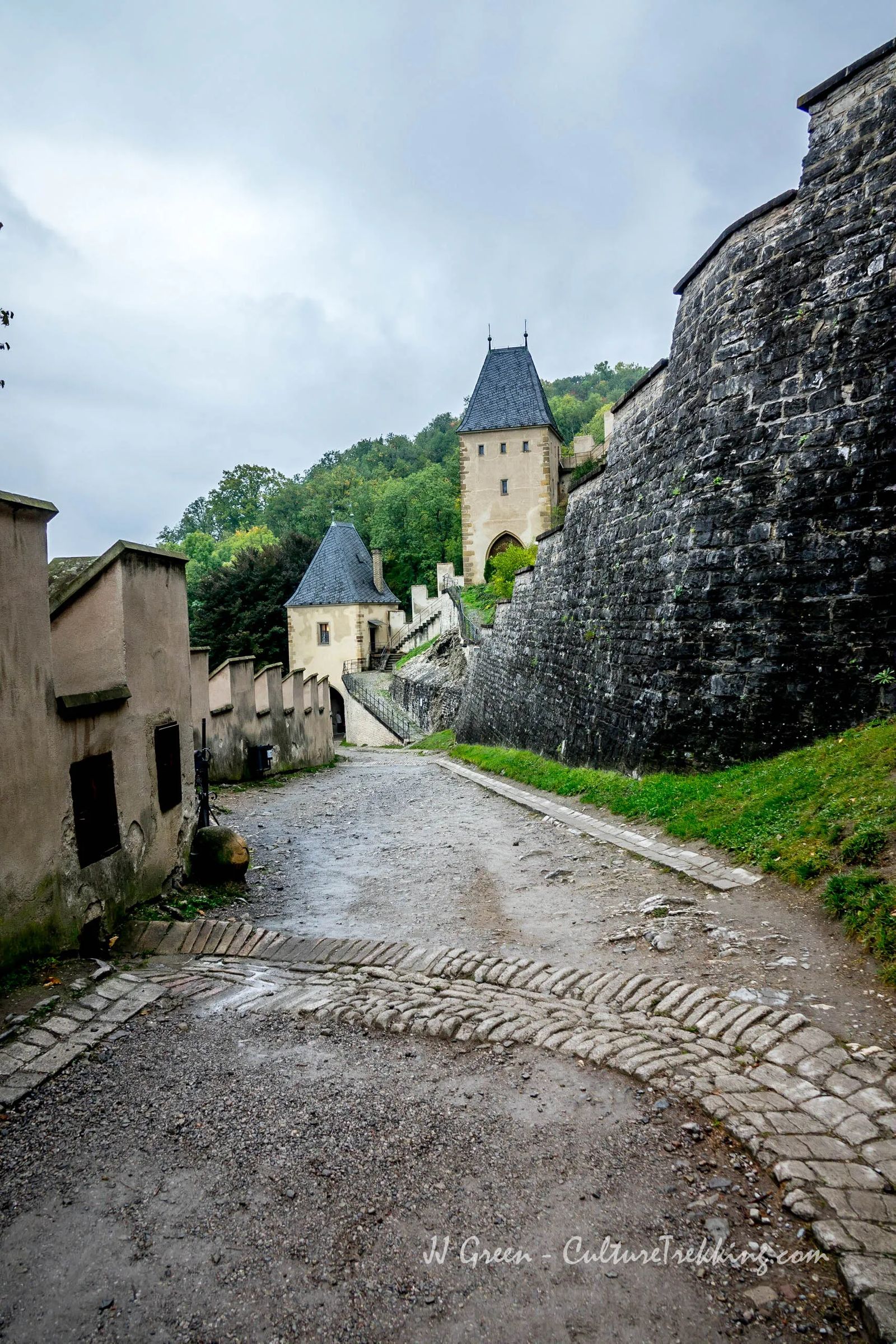 Built by Charles IV as a fortification for his royal treasury in the early 1300's. Holding both the crown jewels, and the crown of St Wenceslaus it was a prime target for raiders. If the jewels were not reason enough to entice neighboring kingdoms to raid, he also built a cathedral of gold.

The Famous Chapel of Gold

The crown jewel of this castle is not something you wear on your head. It is a place you enter into gemstones, Venetian glassware, portraits depicting the whole host of the army of heaven, gold chains and any other extravagance you can imagine. If there was ever an effort to build heaven on earth, I think Charles IV may have almost succeeded when he built the Chapel of Holy Rood. 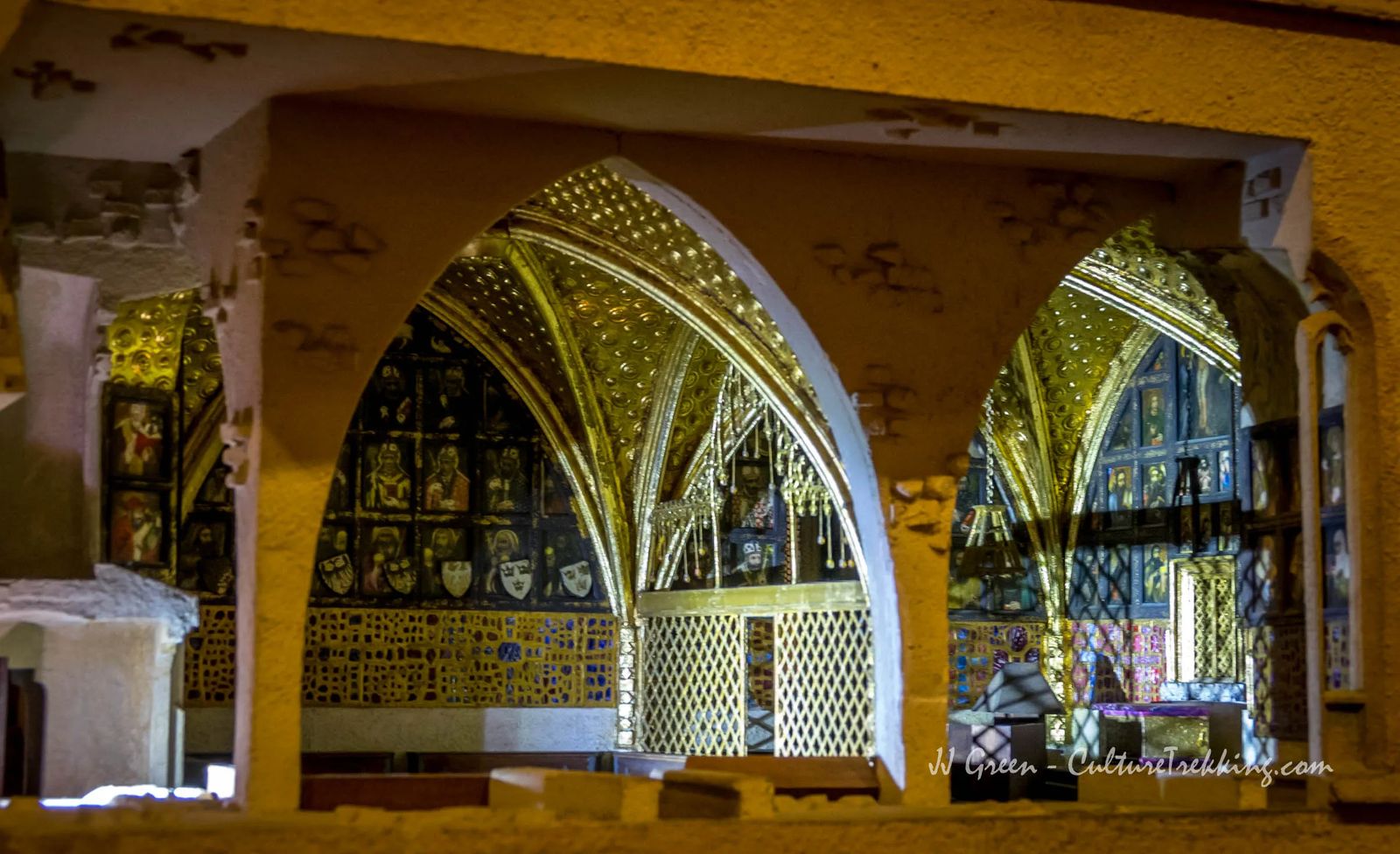 Located in the tower behind three iron doors and nine locks, Charles IV held the Chapel of Holy Rood in his home with such revere that he would only enter barefoot.

Although this is the most well-known chapel, there are two other chapels and one additional church located in this castle. (St Nicholas Chapel, St Catherine's Chapel, St Mary's Church).

The miners of Kutna Hora came to this area to dig for silver and gold ores. They dug nearly 200 feet down into the rock with hand tools and found only water. The Emperor of the time had them convert this into a water table so that once the castle was fortified, they would have an internal source of water during sieges. 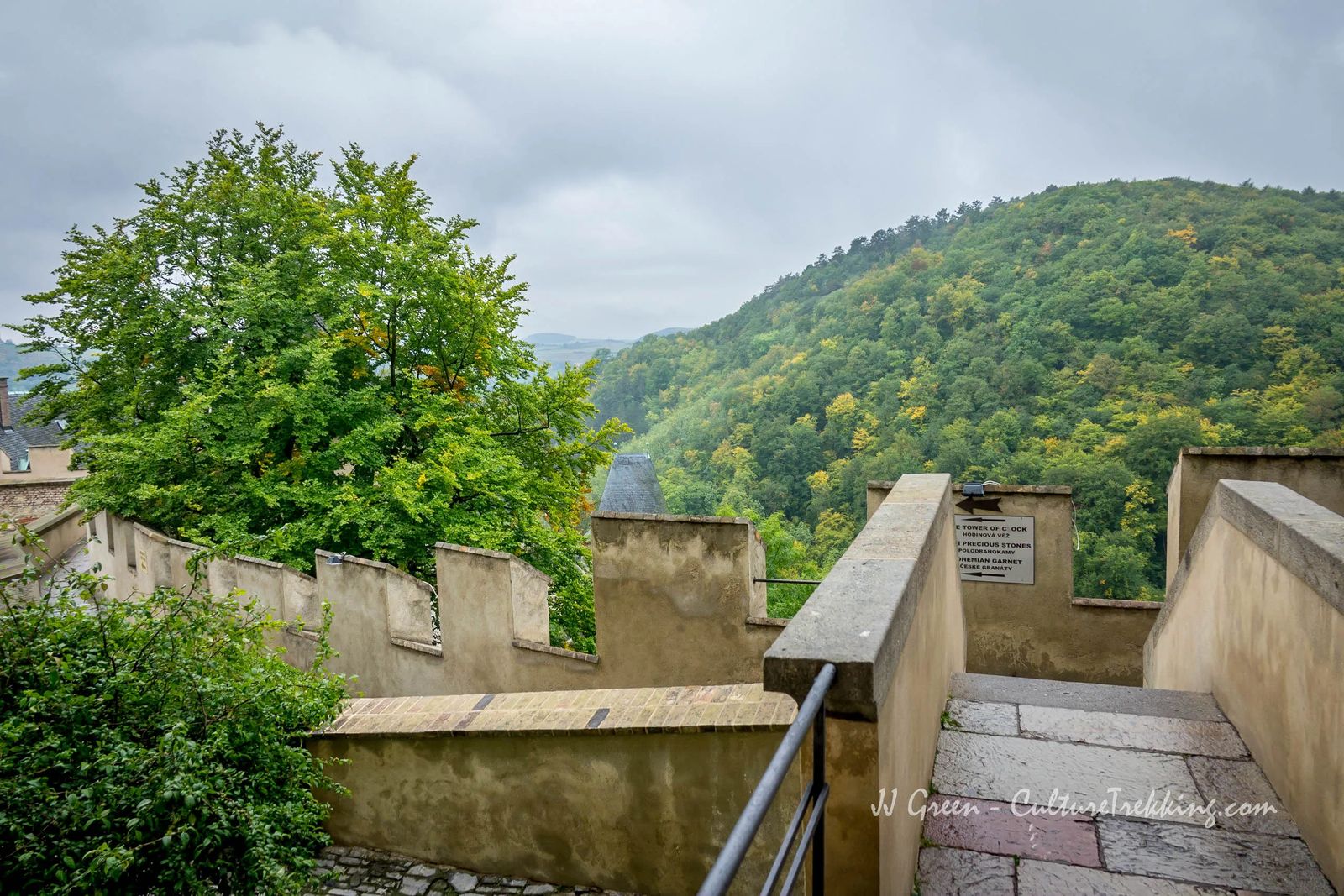 The Emperor left nothing to chance, guarding the parapets 24 hours a day 7 days per week, ensuring no surprises. Walls nearly 30 feet thick, the great tower 175 feet high. You can still be a witness to the former soldiers' barracks within the castle itself.

Despite the manpower the Emperor employed, there were still several attempts of siege. Different towers were completely sieged at different times, but the great tower has never been conquered.

It was well known during that time period that dead bodies brought disease, although most may not have known the intricate details as to why it is a common reason for the spread of disease of that time period. The bodies were flung over the walls with catapults. It was not just dead bodies though, it was carriages full of feces of all kinds and variety....ew.....and I thought our methods of war were barbaric, but this is just cruel and disturbing. 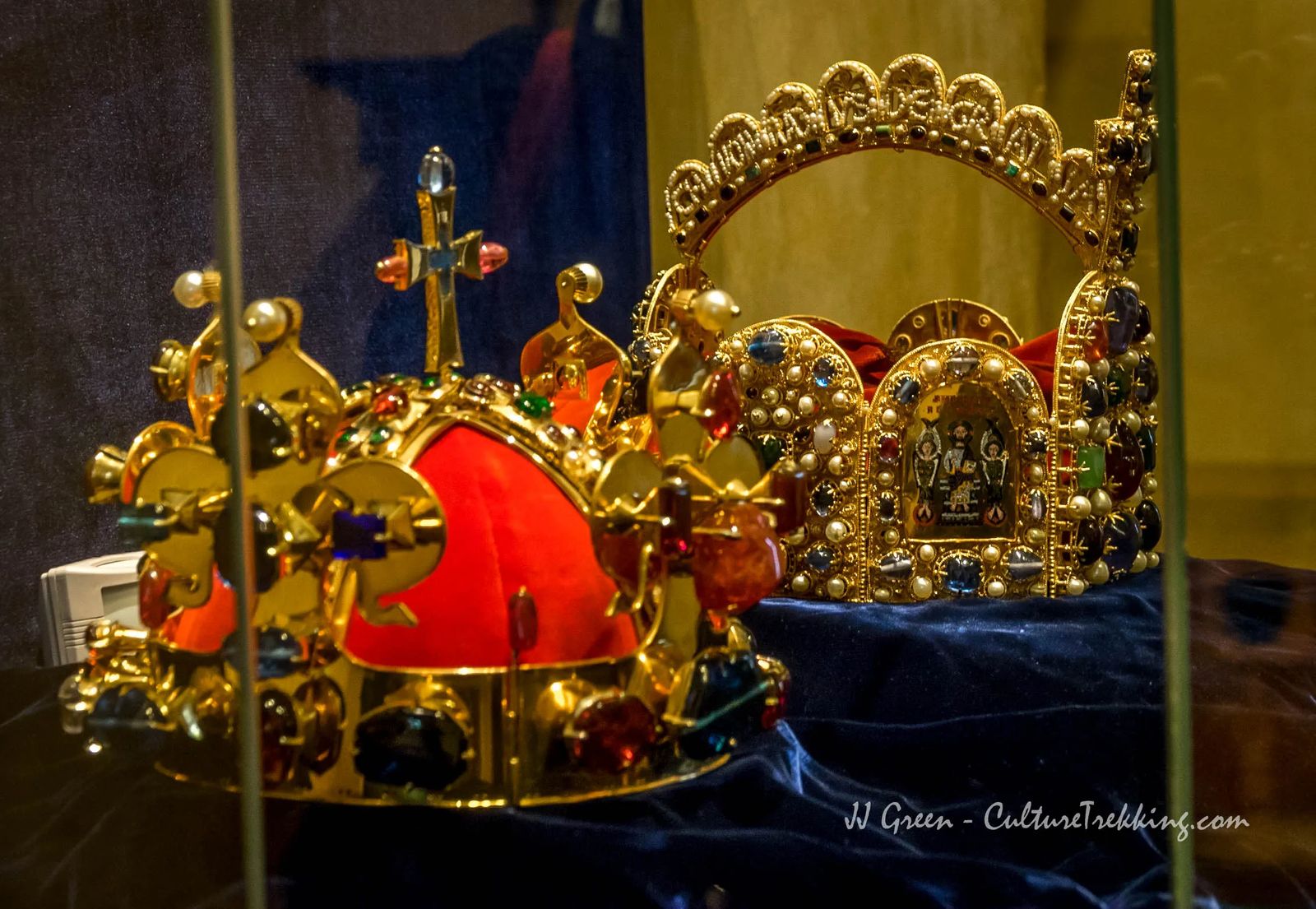 The original crown jewels can be seen in Prague castle but were originally located here at Karlsteijn castle. The replicas do give quite the impression on just how extravagant the originals are. This is likely the only way you will be able to see what they look like beyond a google image search, as the originals are only shown every 5 years to the public.

The Ending to my Fairytale

It was the classic fairy tale travel story for me. The angst and struggle of getting to the castle, the evil police pulling us over. The fairy godmother that whispered in the cops ear to let us go. I was rewarded with the crown jewels, a view of the sparkling river below, and a walk through one of the most stunning and intriguing castles of Prague. 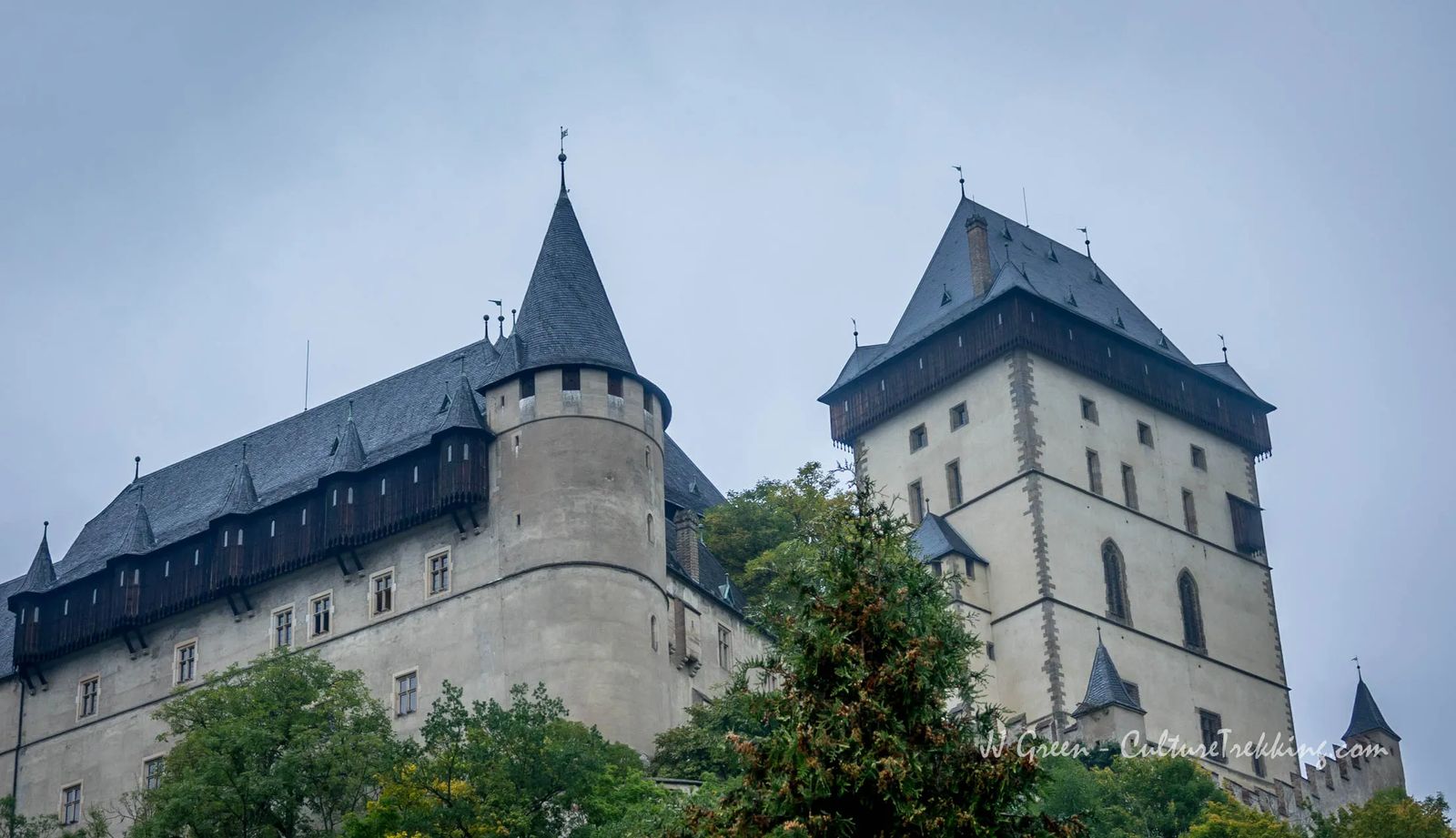 If you find yourself in this fascinating country, make sure you take a side trip to this Storybook Karlstejn Castle.

How To Get To Karlstejn

Uber with the driver waiting for you will cost around $72 USD with a tip (2 hours of driving, with 2 hours of waiting - at minimum).

For a more relaxed stay and time to wander this quaint city with shuttered windows and hobbit looking houses, take the train from Prague station to Karlstejn. This will cost you around $8 round trip on one of the Czech Railway Lines. If you have the time whilst there, make sure to book an overnight stay here. The town is the most adorable town, the people are warm, kind, and very friendly. It does not have the busy city feeling of Prague, and you can experience what it must have been like to live inside Karjlstein Castle's shadow. 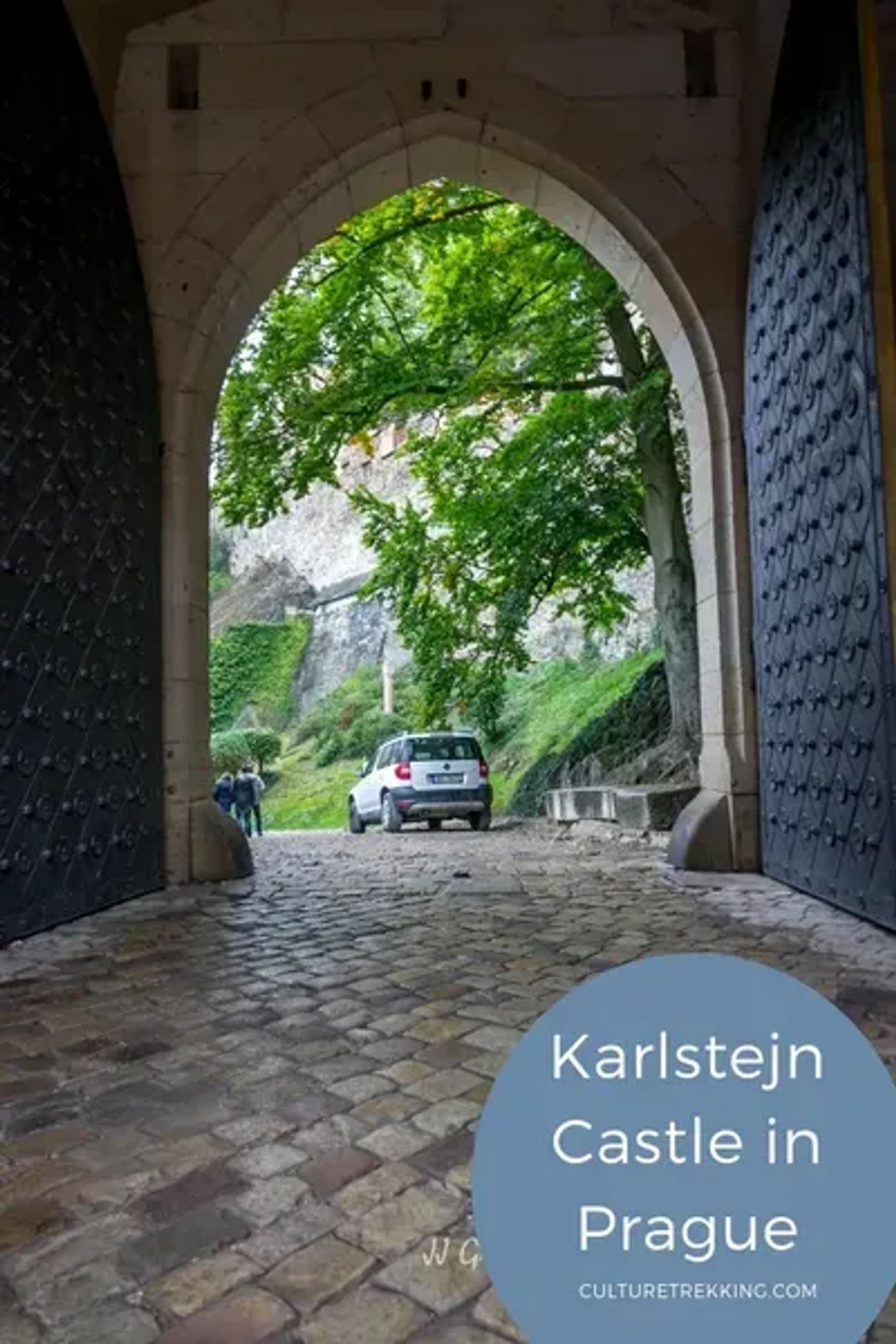 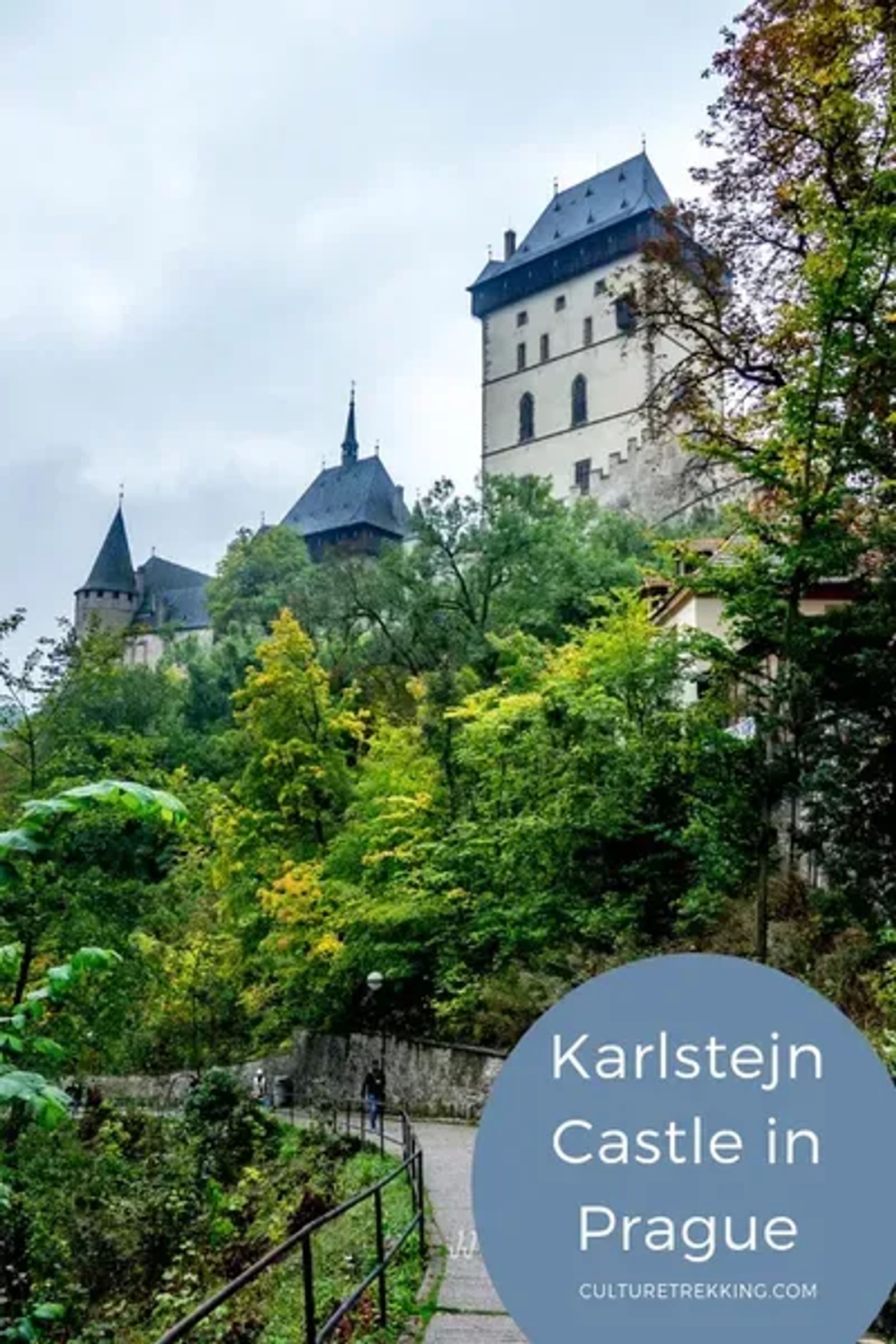 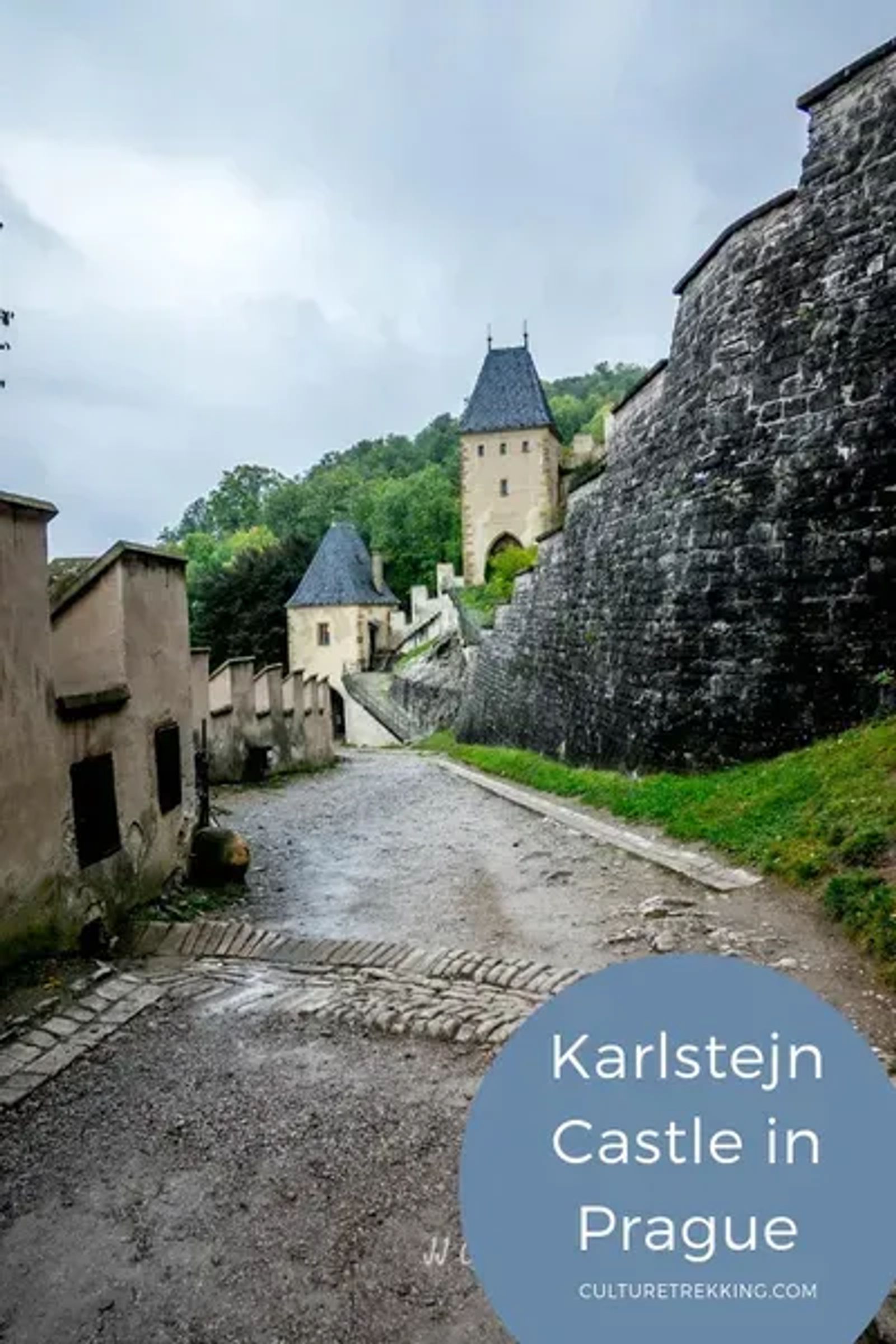 The Art of Prague: Europe’s Hollywood