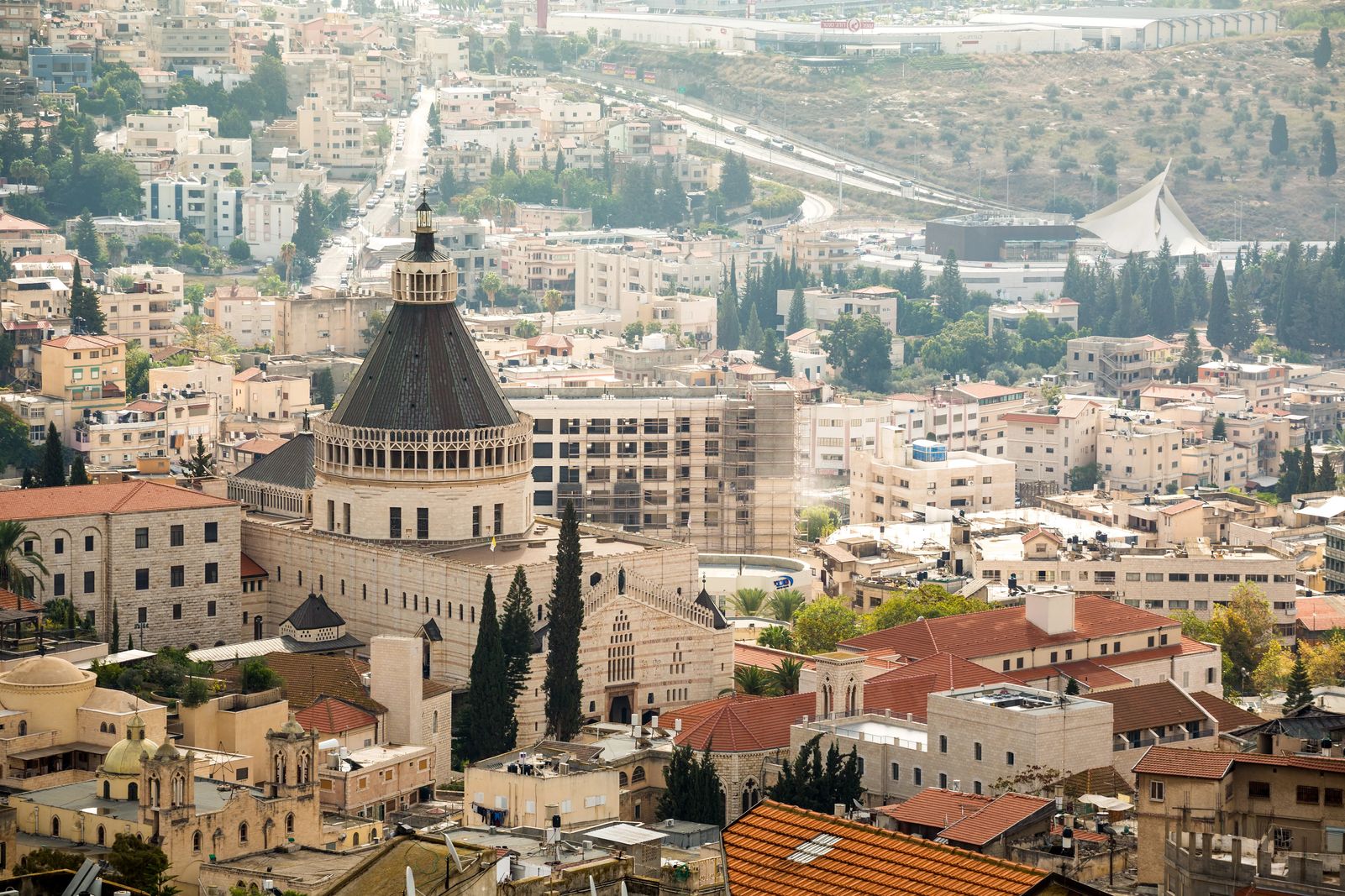 Journey through Jezreel Valley, Nazareth, and Mt Tebor: My pilgrimage through Israel

We traveled from Mt Tebor through winding roads up a mountain for an amazing view of the Jezreel Valley; visited the fortress Tel Megiddo. May I make a suggestion, if you get car sick, make sure you pick a seat in the front of the bus or the car. The Valley separates the regions of Samaria (Central) and Galilee (North). Galilee is the most fertile area in Isreal, and ends up being the war ground for all the empires bordering it. Now according to what I learned from Professor Brent L Top was that Megiddo or Har Megiddo means the high place (hill) or fortress, if we translate this into Greek we see it is actually called Armegeddon, which means 'the last battle'. It was interesting to reflect and hear of how many people and groups have battled on this particular area: Canananites, Egyptians, Israelites, Assyrians, Babylonians, Persians, Romans.....and on and on the list goes, it is said that through archeology we see that there have actually been 22 levels of occupation....the Cannaanite temple that is 4000 year old, the Solomonic gate and stables, and an underground water system that is 2800 years old built by King Ahab (known as Hezekiah's tunnel). To the east you will see Mt Carmel, to the west you see the Jordan Valley. In the 1870s, the Sursock family of Beirut (present-day Lebanon) purchased the land from the Ottoman government for approximately £20,000. Between 1912 and 1925 the Sursock family sold their 80,000 acres of land in the Vale of Jezreel to the American Zion Commonwealth for about nearly three-quarters of a million pounds. The land was purchased by the Jewish organization as part of an effort to resettle Jews who inhabited the land, as well as others who came from distant lands, and the Jewish National Fund. The Jezreel Valley is a green fertile plain covered with fields of wheat, watermelon, melon, oranges, white beans, cowpeas, chickpeas, green beans, cotton, sunflowers and corn, as well as grazing tracts for multitudes of sheep and cattle.

Tel Megiddo was a very interesting fortress that I highly recommend, make sure to bring an umbrella to shade yourself it is a little hot. A guide would probably be best to get here and to understand the different things that this place has to offer in the way of history, but they do have plaques that can explain things to you in English if you wish. Notice the cement manger, this is an example of what Christ would have actually been placed in. You will also see the ancient gate entrance into Megiddo, it was strategically designed to trap the troops that would enter this city, in an L or S shaped sort of pattern. We were able to take some metal steps, sort of like walking down rickety scaffolding, mind your head if you choose to go down. At the bottom you would see where they would get their water. A secure location within the city itself that they could sustain a city if it was under siege.

Next we go to Nazareth (Natzer in Hebrew means root or branch), a city which in the time of Christ only had a few hundred people, so how could anyone significant come from this city when it was so small? Now it has over 40 churches, convents, monasteries, private religious schools etc... If you look at Gabriels Church, this is Israel's oldest Christian church. Then we went to the Church of Annunciation, it was built by the Franciscans in the 1960's. The Church of Annunciation is where the Angel Gabriel's announcement to the Virgin Mary, that she would give birth to the Christ child. (Luke 1:26-28) The Byzantines were the first to build a chapel over the grotto believed to be the place where Gabriel appeared to Mary in 427 AD, then the Crusaders made Nazareth the main center of their kingdom &amp; rebuilt a larger church in 1099 AD, 1730 Franciscan monks built over it again, then 1955 was demolished to make way for the modern basilica, and the current church is Roman Catholic and built in 1955. It is the largest Christian church in the Middle East. There are plenty of plaques that will tell you areas of interest in the Church.

On a personal note, this was one of the first sites in Jerusalem that I had been to that had significant meaning in Christ's life, or the beginning of it. I was a little startled at how large the church was that had been literally built over other churches and other sites. For me, at least in a way, it took away from the sanctity of the place. I was grateful that it had been preserved, but I did not feel the awe and wonder I felt that I should have, and was slightly disappointed in a way. I think if I had known beforehand how commercial and fluid it had become for the hoards of Christian Pilgrims that would walk through this place, maybe, just maybe I would have had a little less of a cultural religious shock. When we walked through this massive church it was nice to see every country and their representation of the Virgin Mary with the Christ Child, and that the world in essence was celebrating the life of the Christ Child. I was however, severely disappointed with America's representation, I personally felt that it was made more for the artist to get recognition than to make the centerpiece the Christ Child and his mother. This is just my opinion, but I think most of the people in our group felt the same way. I did reflect on the situation Mary had been placed in, to be told by a Heavenly being that she would be the Mother of Christ. Well, personally, if I was in her shoes, I would be freaking out, saying, "uhhhh, you have the wrong person, are you sure you have the right address?!?!" But come to find out, in the Jewish culture at that time, every Jewish girl was taught that a Jewish girl would one day be the mother of Christ. (Luke 1:27,30,34)

As I walked around the Church, I felt like this really was a beginning, both for Mary and for myself, in realizing what it really meant to be a 'Christian'. I walked around and listened to the different religious groups worshiping and holding devotionals in different corners of this church, upstairs there was a small mass being held, and a certain chaotic but quiet reverence for the place. I think it humbled me to see how devoted people were to this place and what took place in this building. I also was a little shocked to see Muslim families, women with their Hijabs touring this place. I did not realize that Christ was important enough to them to come visit a place such as this. But I came to realize, that they do revere and honor him in a way we would honor any prophet, they just do not recognize him as the Savior of the world, and redeemer of our sins.

Our next stop will be at the Church of St Joseph, it was built in 1914. Some believe that this is the site that the Christ Child actually preached and announced himself as the Messiah. The site in Arabic is actually called "Messiah's school". The site has a Crusader type construction with a vaulted dome roof. See Luke 4, a rare and early account of actual synagogue service. The benches on the side are for people to sit, and the podium in the middle is for reading the Torah.

The next journey is Mount Tabor, why is this mount significant? It was used by the Canaanites for religious worship. This mount also saw the Israelite's under the command of Deborah and Barak defeated the Canaanite army of Sierra 1125 BC (Judges 4). If you control this Mount, you control the trade routes from the North to the South, and the East to the West. Then in the Old Testament we see Gideon's victory over the Midianites. It is also used as a symbol of beauty and majesty, along with Mt Carmel &amp; Mt Hermon (Psalm 89:2 and Jeremiah 46:18). The Greeks fortified the area in 218 BC and later the Maccabees take it and control it. When the Jewish Zealots revolted against the Romans in 66 AD Josephus fortified Mt Tabor against the invasion of Vespasian, but ultimately the fortifications on Mt Tabor were captured by the Romans. As early as the 4th Century, Christianity recognized Tabor as the site of the Transfiguration-- the Christian tradition of Tabor is almost as old as the traditions associated with the Holy Sepulcher. The Byzantines built a monastery and church there and they were later restored by the Crusaders in the 12-13th centuries. The present church and basilica were built by the Franciscans in the late 19th and 20th Centuries. Mt Tabor was also important in Military History, Crusaders took and lost Mt Tabor multiple times, Napoleon defeated the Ottoman Turks here in 1799, and was an important defense point during the 1948 War of Independence.

So what spiritual significance does this Mount have? Jesus is transfigured before Peter, James, John &amp; they beheld Christ's glory (Matt 17:2; 2 Peter 1:16-18). Peter, James and John were likely transfigured before the Lord here (TPJS, 158). Moses and Elijah are translated beings, appear with the transfigured Christ to bestow upon Peter, James and John the "keys of the kingdom" (fulfillment of Matthew 16:15-19). John the Baptist (Elias) and perhaps other prophets were present (JST Mark 9:1-4). Peter James and John see in a vision the "transfiguration" of the earth (D&C 63:20-21). Peter, James and john receive their endowments and "the more sure word of prophecy--- being sealed up unto Eternal life (2 Peter 1:16-19). Jesus was strengthened and encouraged by Moses and Elijah so as to be prepared for the pain and agony required to work ou the infinite atonement. Peter, James, and John were taught in plainness concerning Christ's imminent death and resurrection (JST Luke 9:31). God the Father, overshadowed and hidden by a cloud, was present on the Mount and His voice is heard bearing witness of the mission of teh Savior (Matt 17:5). When President Kimball visited the Holy Land, he asked to go to Mt Tabor, which was 2 hours out of schedule, because he said it was a 'special place'. Elder Ludlow, who had accompanied President Kimball on this trip, even on his death bed could not tell what special things had happened, but he did admit that 'many special things happened'.

I also felt that many special things were beginning to happen in my heart on this trip. In retrospect, I feel that I too began to change at this time, and knew that I could never deny Christ as a Savior to the World. I cannot explain the feeling, maybe it was the beautiful day that we had, the people I was with, but in my heart....I knew.... I was standing in a place of not only great history, but of great spiritual history. This was probably one of my favorite places in Israel.