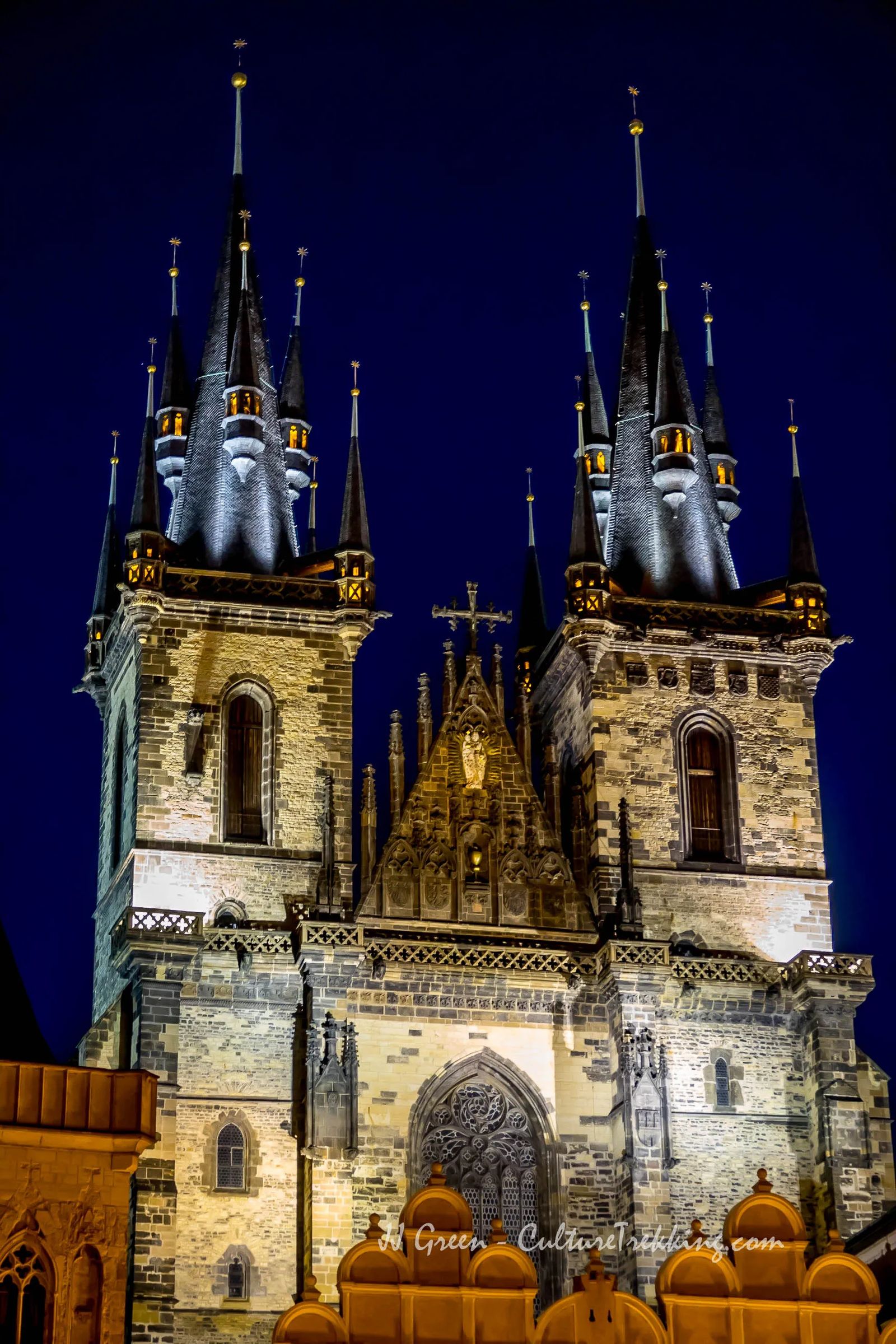 Religion has always been tied to Europe's past and cultural foundation, especially in Prague. Known for its Baroque architecture, it is now called Europe's Hollywood. The best examples of both culture and beautiful architecture lies in the heart of its Cathedrals. So come explore Prague's Cathedrals and see just how much these buildings influenced their culture even to this day.

This is the city's second oldest church, built around 920AD. If you look closely at the exterior, the two white towers behind the pink façade looming over its visitors are not quite equal in width. This was done on purpose as a point of symbolism. The wider steeple on the Southside is called Adam, the narrower North tower is called Eve and is built at a slight tilt towards Adam.

The Basilica had to be rebuilt in 1142 after a massive fire and was later rebuilt. The Baroque style façade was added later in 1671. 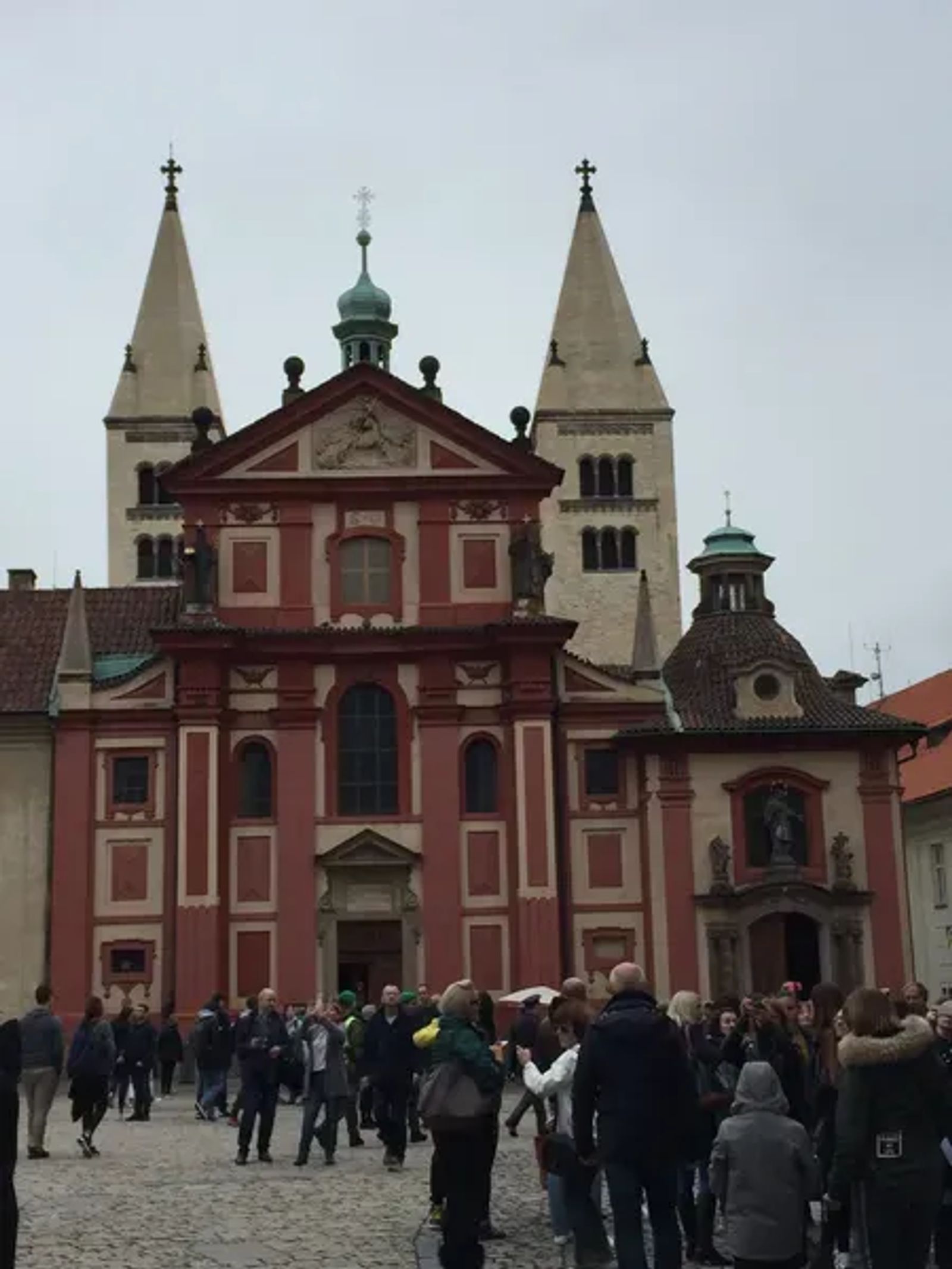 Its ceiling is designed from a deep dark wood when you look up at the ceiling it seems miles away. This is due to the narrowness of the building making it appear as if the heavens themselves are lifting the ceiling right off.

There are often classical concerts in the evenings that you can attend. Going to one of these concerts is quite romantic.

This Prague Cathedral took over 600 years to build and was pivotal in the religious wars that happened in Prague. It houses some of the most important historical artifacts to Prague history including 14th century mosaic of the Last Judgment, tombs of St Wenceslas and Charles IV, a baroque silver tomb of St John Nepomuk, and the lavishly designed Chapel of St Wenceslas. 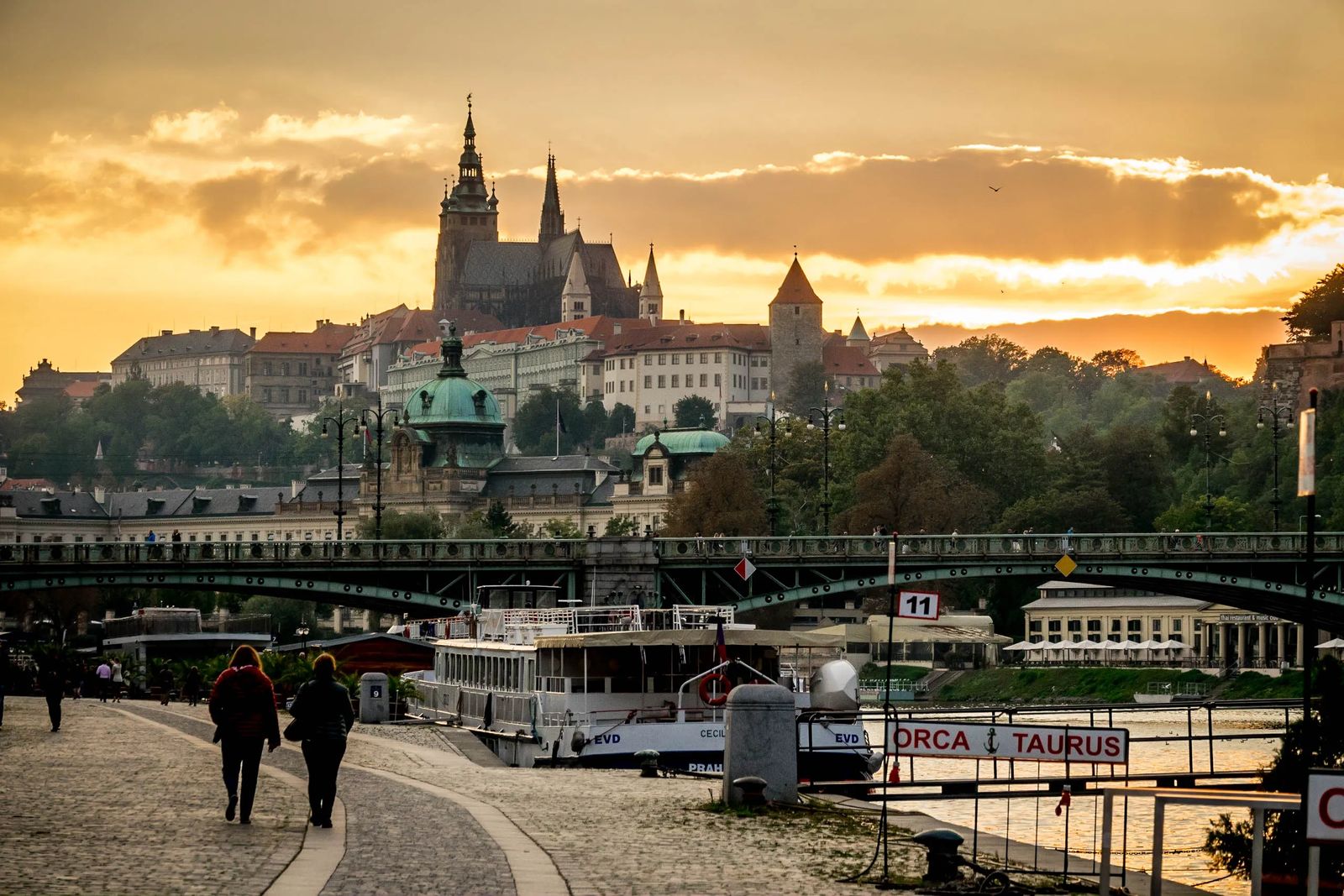 I found out later that the doors are from 1953, and then the first layers of the church foundation were placed in 1344 (during the time of Emperor Charles IV).

Without taking up too much space this building encompasses several different styles over several centuries. The foundation is a Romanesque rotunda, then a French Gothic style was adopted, after which followed the late-Gothic, Renaissance and Baroque details, and finally, the Cathedral was consecrated in 1929 with a 20th-century modern stained glass window you are able to view as you enter.

Despite not being officially consecrated until 1929 several coronations of Czech Kings and Queens took place here. The naming of the Cathedral was after the Patron Saint of the Czech Republic, Saint Wenceslaus.

Wenceslaus was the son of a Duke and a Mother who was previously a daughter of a Pagan Tribal chief & forced to convert to Christianity. When he was 13 his father died and his Grandmother became reagent, his mother was so angry about this she plotted and killed his Grandmother. Immediately after her death, Wenceslaus's mother began taking terrible actions against Christians in the area. For 5 years Christians were targeted until Wenceslas was 18 he assumed leadership of the government. His mother was exiled for her crimes against Christians & for the murder of his Grandmother. His brother Boleslav plotted with 3 other nobles to take power and killed Wenceslas after stabbing and lancing him to death at a feast for the Saints of Cosmas and Damian. Immediately after his death, Wenceslaus was considered a martyr and a saint. Different stories and biographies were written and circulated about his life, and thus still remains a legend with many tales being sung and told of his life and legend throughout Prague.

This is the most famous Baroque church in Prague. This charming chapel is located in Lesser town. A former Gothic chapel once stood here and was built over, this chapel was consecrated in 1283. St Nicholas Church was built over this and is considered the most valuable Baroque buildings North of the Alps. It took nearly 100 years to complete its construction. The 259 foot (79 meters) dome makes this the tallest interior in Prague. The Jesuit Chapel was completed in 1710 after a generous donation of a prominent Czech citizen donating his entire estate worth 178,500 gold for the construction. 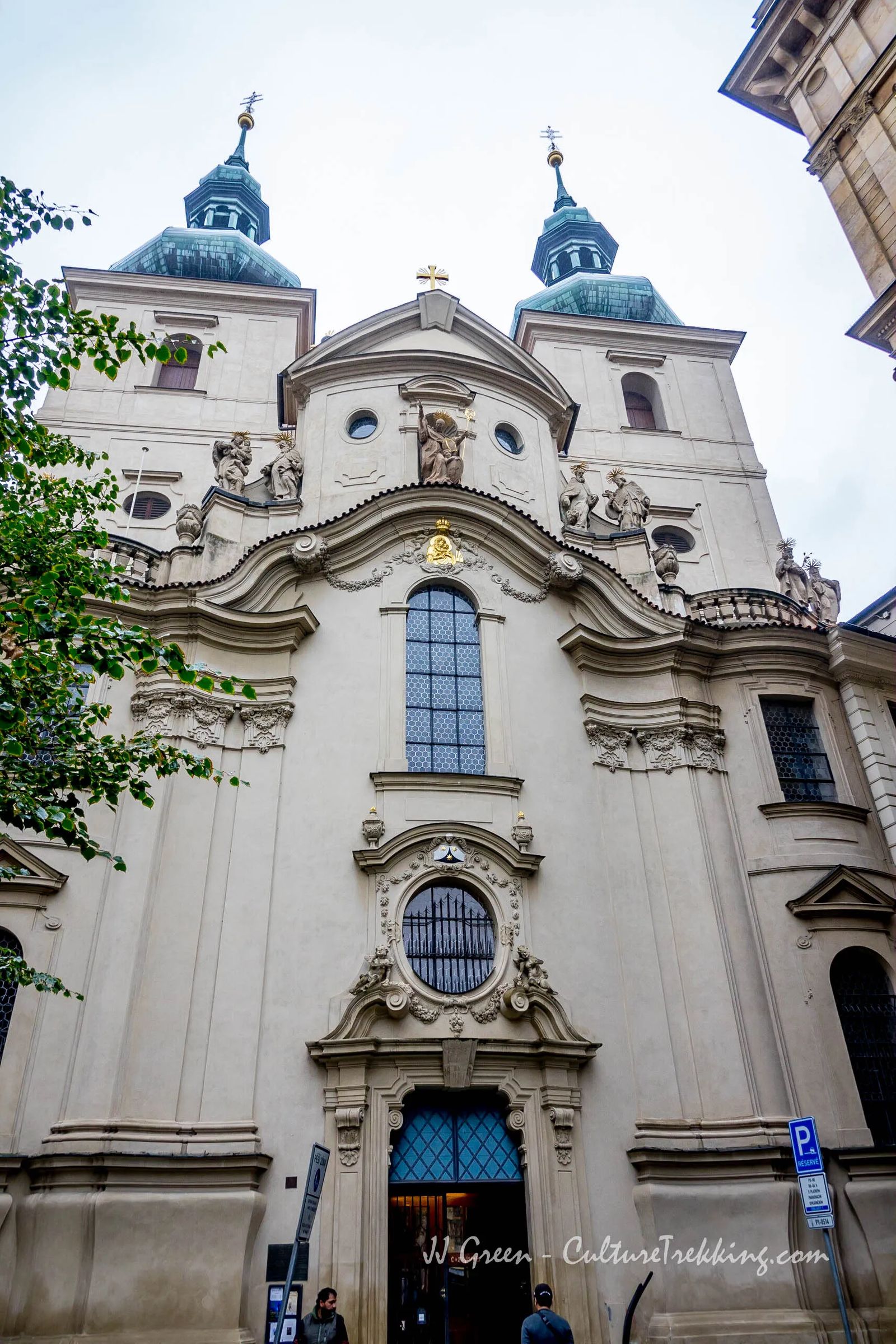 The Jesuit order was abolished by Pope Clement XIV in 1751, and St Nicholas became the main parish of the lesser town. During the communist era, the church tower was used as an observation deck for State Security. From the tower, the State Police could spy on the American and Yugoslav embassies as well as the access route to the West German embassy.

After the war St Nicholas Church was handed over to the Hussite movement, which utilizes the beautiful building for both its services as well as classical concerts.

Hours: Only open for Mass or concerts, see the Mass Schedule

Church of our Lady before Tyn

When first seeing the imposing towers, I thought surely Maleficent would poke her head out of one of the upper windows and a crow would caw and circle overhead. Maybe the Witch from 'The Wizard of Oz' and her monkeys would take flight saying 'I'll get you my pretties'. Needless to say despite being a cathedral, the towers look very Gothic and a bit on the spooky side, not the spiritual side.

You will likely use this church as a focal point for your walk around Prague. That was always the idea, wasn't it? To have a church be higher than all of the surrounding buildings to draw people to the center of town and to God.

The Church of Our Lady before Tyn was founded in 1385. In the 15th century, the Hussites came in and took control of the church.

Hussite Definition: a member or follower of the religious movement begun by John Huss. After Huss's execution, the Hussites took up arms against the Holy Roman Empire and demanded a set of reforms that anticipated the Reformation. Most of the demands were granted in 1436, and a church was established that remained independent of the Roman Catholic Church until 1620.

The two dominating towers are 262 feet high (80meters). One tower, Adam, is larger than the other, Eve, a classic Gothic architecture play on feminine and masculine parts of life. As you walk inside, notice the Organ, it dates from 1673 and is the oldest in Prague.

You can still attend Roman Catholic Mass today, as well as classical concerts.

This Church marks the entrance into Old Town of Prague. Built between 1578-1601, built on the foundation of the former Dominican gothic church of Saint Clement. It was later sold to the Order of the Jesuits in 1863, who remain the caretakers and owners to this day. 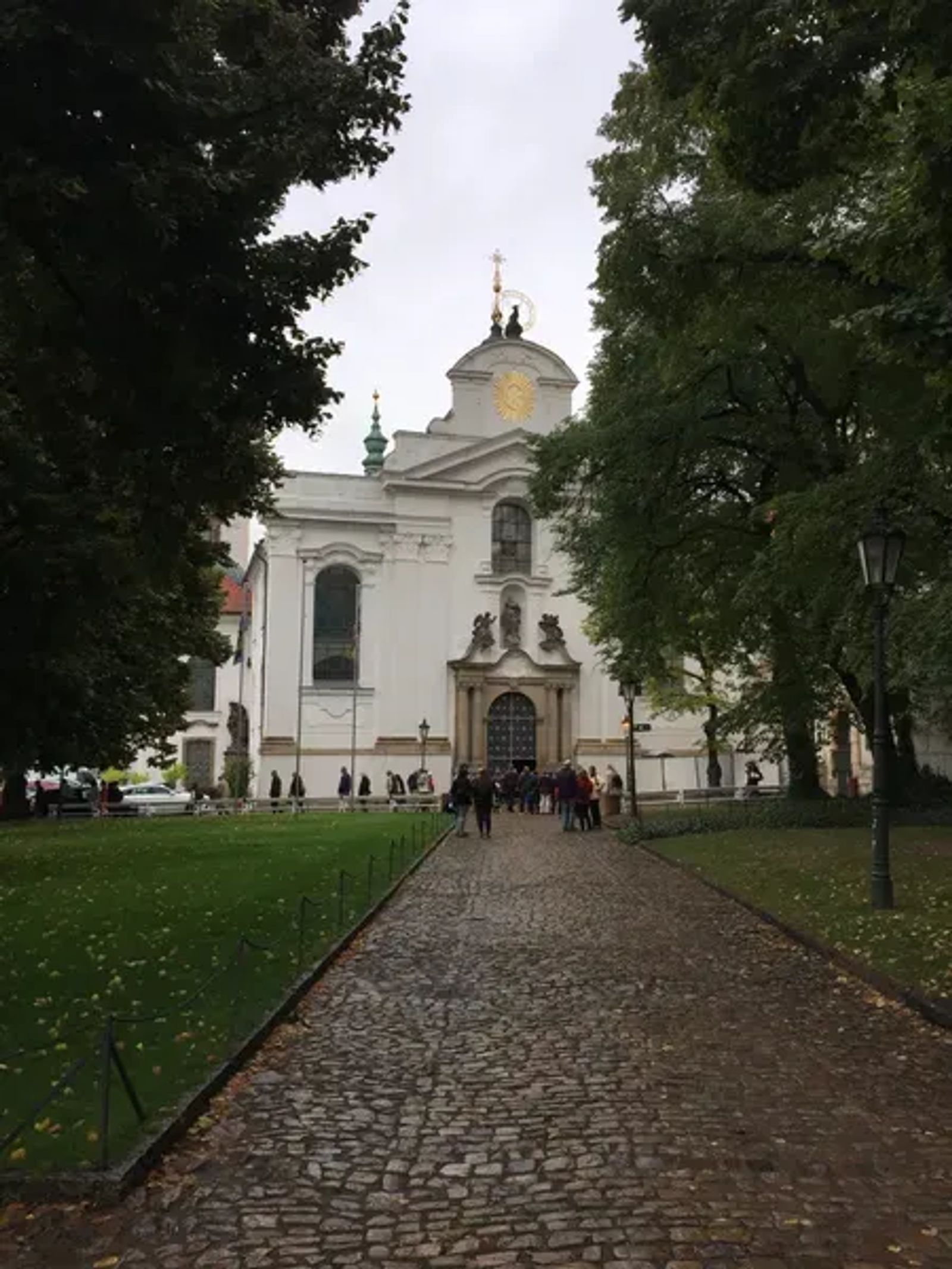 The exterior is decorated by the statues made by Jan Jiri Bendl. They represent the Saviour Christ flanked by the four evangelists. Inside, the altarpiece was painted by Jiří Hering in 1632 after “Transfiguration of Christ” by Raffael. The ceiling fresco symbolizes the four continents known at the time.

If you head down to the crypts, you will find an unlikely paradox of patrons buried there. In St Salvator Crypts lies Father Koniáš, the “destroyer of Czech books”, but also Bohuslav Balbín, the “defender of the Czech language”.

Concerts: There is a wide variety of Concerts available in St Salvator Church

Why Visiting Cathedrals in Prague is Important

Visiting Prague is like going straight to the heart of Hollywood for Europe. My favorite Church was likely the Church of Our Lady before Tyn and the unique pink façade of St George's Basilica. Although I realize many people do not hold the same beliefs, or even believe in God - if you love history or the human struggle then visiting these churches is a must. 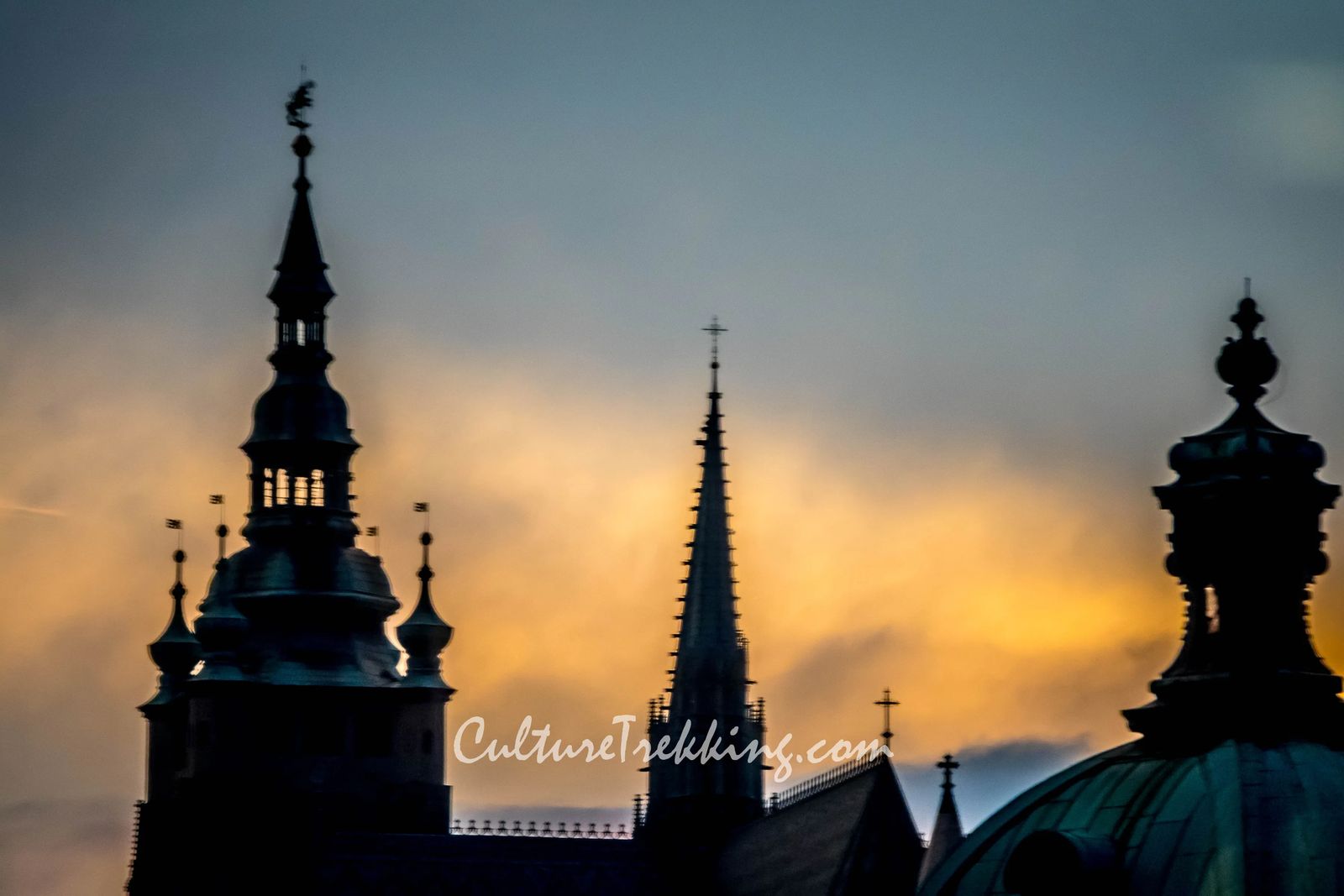 The collection of Cathedrals in Prague as a whole will give you a better idea of how much religion has been fought about and over in this region. It may not have been as brutal in Prague as it was in other parts of Europe, but as an American, the struggle of Protestant vs Christians throughout European history is shocking and astonishing. If nothing else, the tour of these Cathedrals will highlight specifically what Prague is known for.....the melding and molding of architectural styles to create true masterpieces. 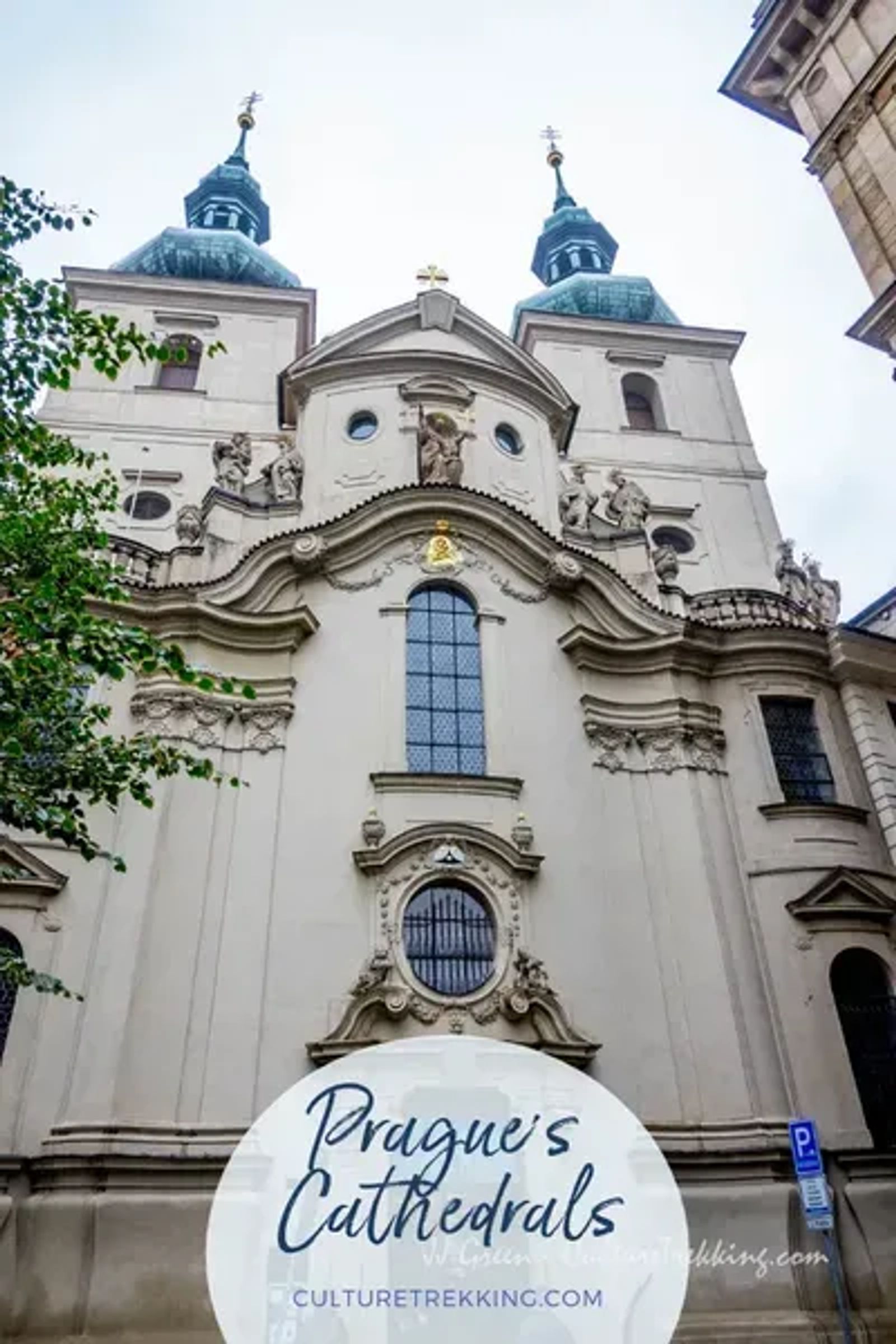 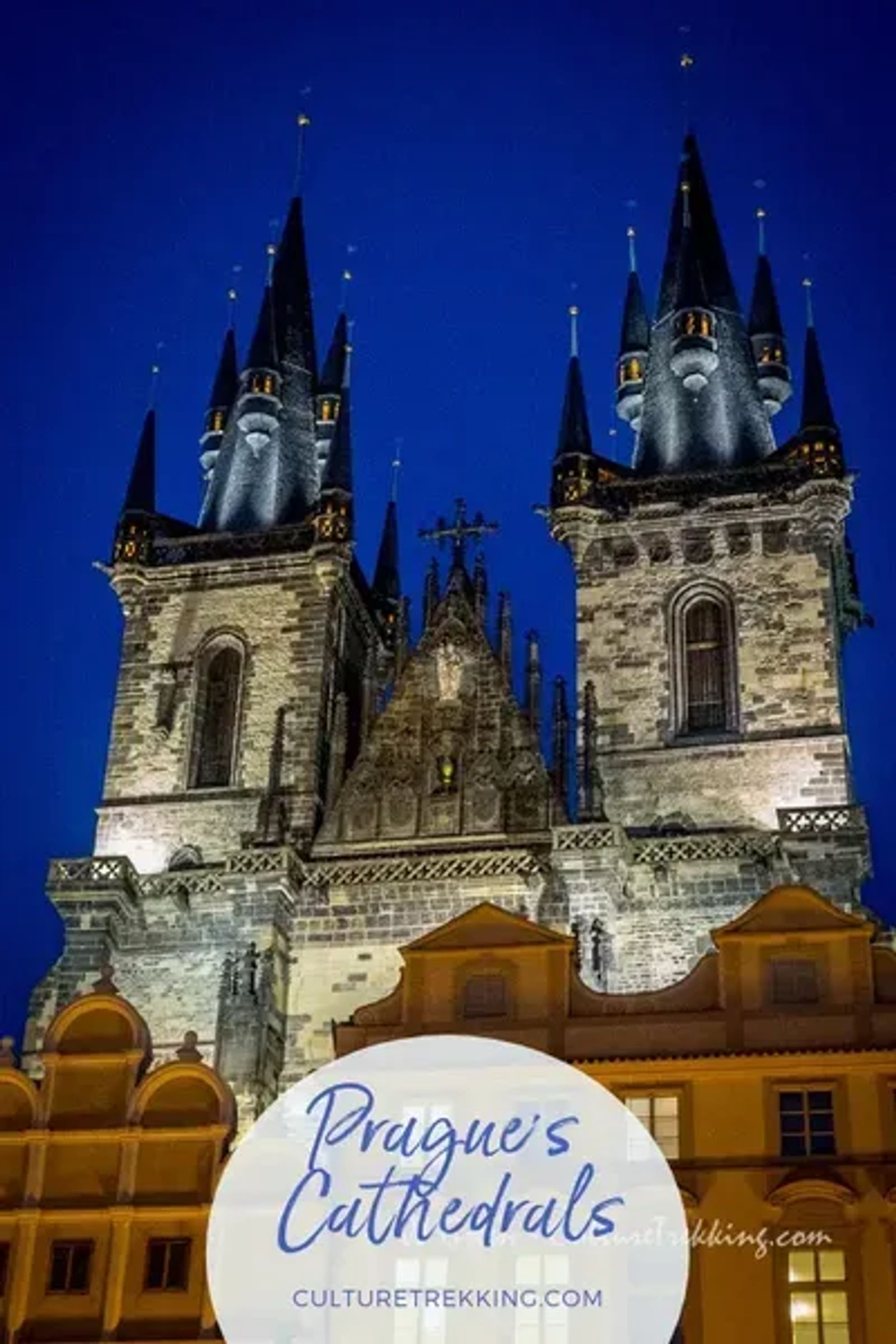 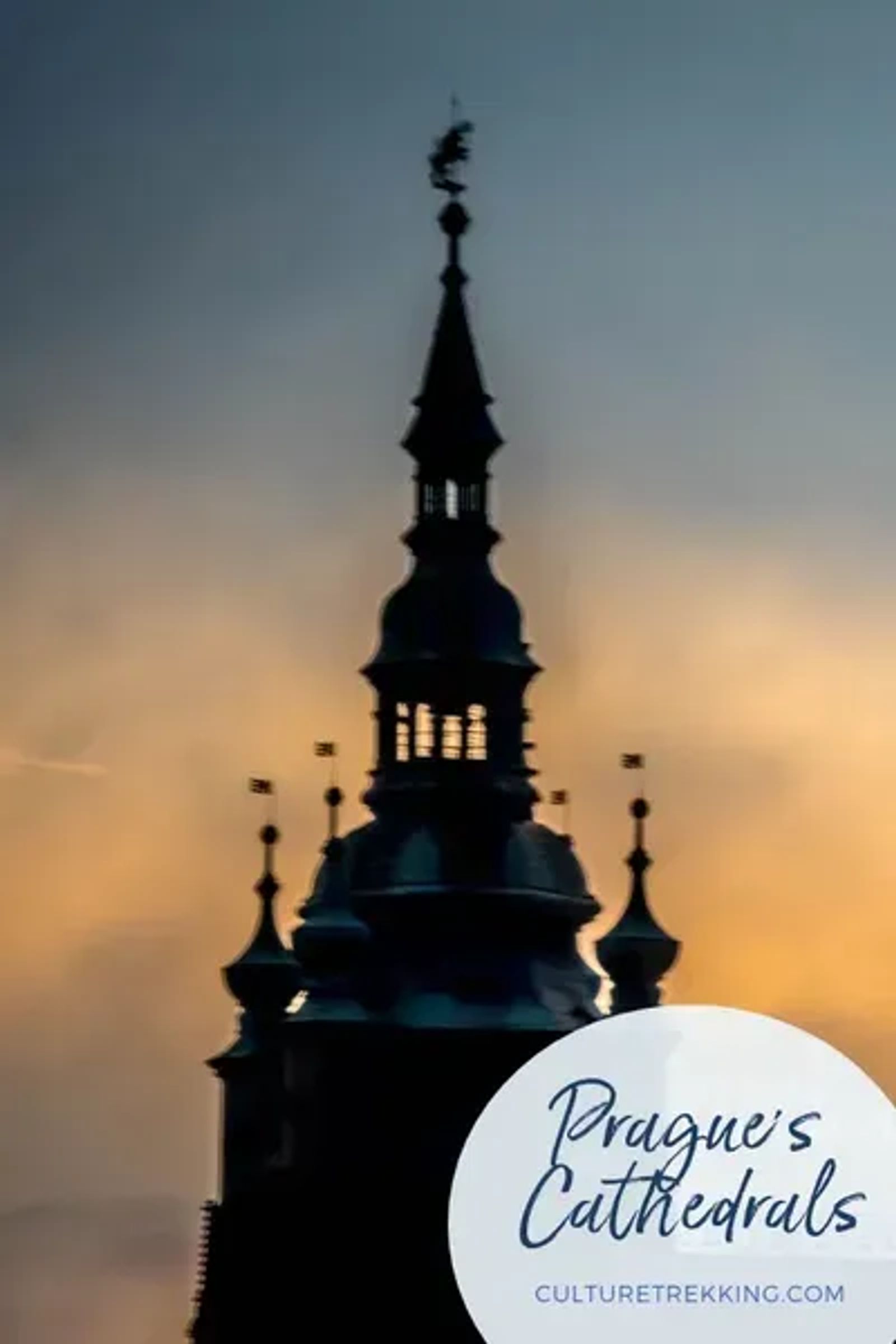