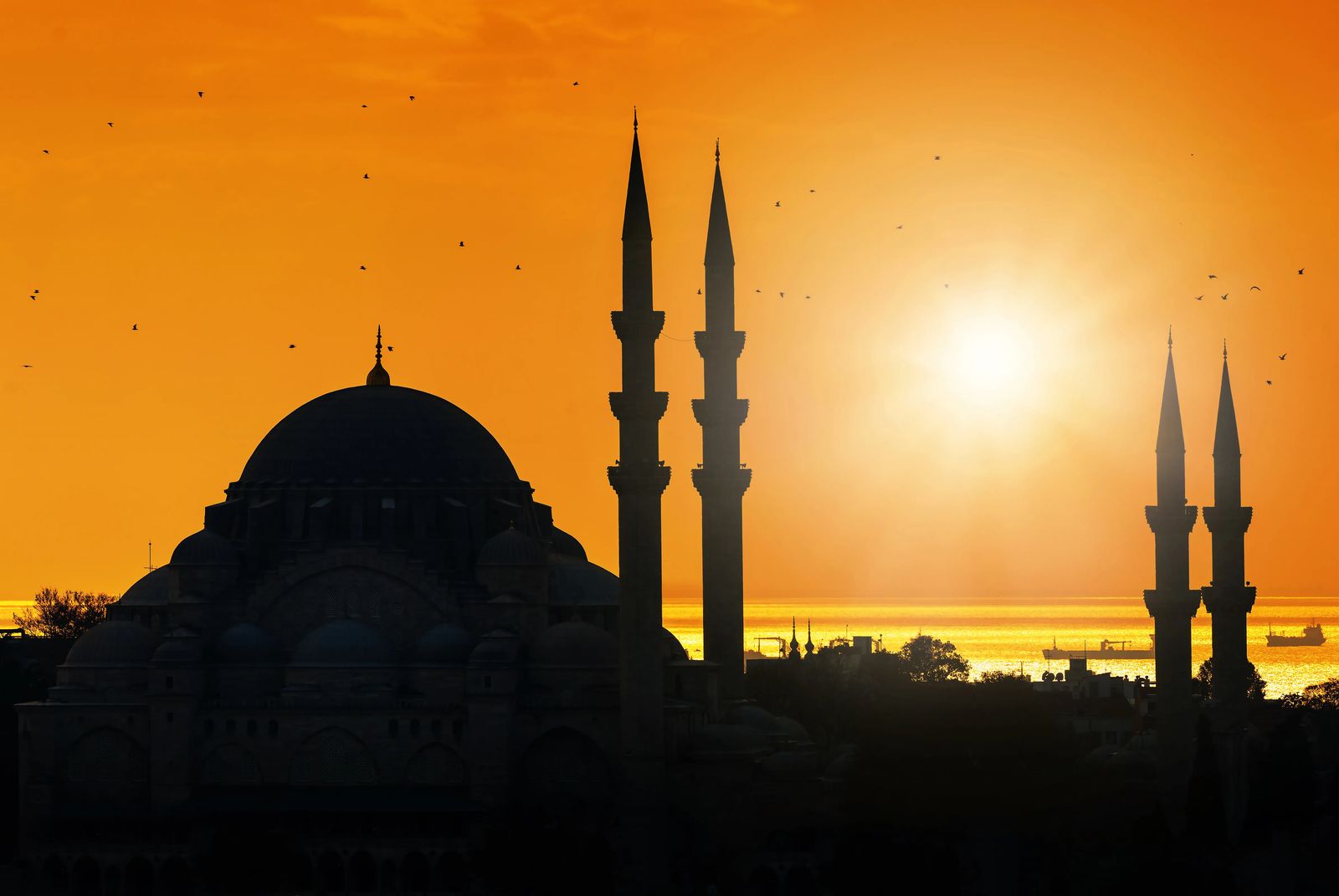 Ramadan Made Simple : An American Perspective

**The purpose of 'Ramadan Made Simple' is to educate, not offend. To those who are of the Muslim faith, feel free to comment and help educate us all, and Rhamadan Kareem to you**

From all the movies I have watched of Muslims bombing Americans, treating women poorly & the mysterious secretive nature of the religion -- to be honest I started to become afraid of Muslims & those who wore Hijab's. So me, being who I am, set out to face my fears and educate myself on what the truth was. I don't like to give into the mainstream media, and I'm not a 'follow the crowd' kind of personality.

As fate would have it, I started working for a Muslim doctor in Las Vegas, and ended up rubbing shoulder with his friends & colleagues who were also from the same religion. He was actually from Pakistan, and after 2 years of working for him & with a nurse who converted to the religion, I learned a lot & my perspective radically changed.

Bottom line, they are human beings, who find passion in their religion that gives them a sense of community - when many do not treat what they believe with much respect. No matter what religion you come from, there will always be the 'few', who skew the perspective of the 'many'. Being a member of the Church of Jesus Christ of Latter-Day Saints (aka: Mormon, as the public calls us- see LDS.org for more on this), we also have a problem with this aspect and many assuming we are part of the "Sister Wives" - which couldn't be further from the truth. I think this is why I wanted to learn more, because I know how it feels to be misunderstood, and have people assume things about me that aren't true.

Quiet frankly, it is hurtful & makes me feel more isolated when people don't bother to 'seek first to understand' instead of just Ass-uming. So after several years of observing, learning, reading (yes, even read 'The Koran for Dummies' lol)

1 - It Is Deeply Religious

It is a deeply religious time for them, which is celebrated as a family. And follows the Lunar Calendar, which means it is a few days earlier each year. This year it begins on 5/27/17

Days of preparation happen beforehand, each country is different in what they prepare but typically involves special dishes rich in calories and electrolytes that help sustain them throughout the day. (Below is Harrira, a traditional soup made for Rhamadan that is a Tomato base with spices and is very very delicious)

Rhamadan begins and ends with the phases of the Sun and coincides with their calls to prayer. The Morning prayer of Fajr (must eat & hydrate for the day BEFORE this prayer); and Maghrib (eat til you are sick, and celebrate the day with family & friends). For local times on call to prayer (for education, I found this App for Iphone and Samsung)

Fajr: it is a prayer & intention of the heart, you fast to show your obedience to Allah (God) and submit your will to his for your life.

Rhamadan is one of the 5 pillars of Islam, or one of the 5 major lifetime commitments that they believe is required by God to be rewarded for in heaven. It is also the Lunar calendar month in which the Quran (their Holy Book) was revealed & in a way is a world-wide celebration for showing God how much the appreciate the direction it provided them.

Note: If you read about when their Prophet Mohammad was inspired to found this religion & belief system, it was in a time of a lot of turmoil - where women were sold, bought, killed. Pagan beliefs were rampant & it was a call to leave that aside and live life as a higher law and it ended up saving thousands of lives within the region because of its founding.

Whenever a life is saved, I am deeply grateful to whatever source helped to save it. Working in the medical field and seeing the frailty and emotional struggle with physical ailments; consoling those who have lost a loved one -- it takes a lot out of me emotionally.

So realizing this bit of history, made me particularly grateful to their Prophet Mohammad for providing an avenue in which lives could be saved during its founding. While I know that their are lives lost in the current situation with terrorists and bombings, this is not the first time that lives have been lost in the name of religion. Christians have slaughtered those of the Jewish faith, Romans caught Christians and put them into gladiator pits and drug them behind chariots for sport and their are centuries of people doing this over and over and over....in the name of religion.

This does not diminish the pain or the loss experienced by those that have lost their lives in the battle against terrorism; it is a cruel, hateful & heart-breakingly evil thing that is happening in and to our world. But the best way to battle that, at least in my opinion, is by education, reaching across the isle and showing forgiveness, spreading understanding not spewing words of hate that further isolates us from our fellow human beings. History is going to keep repeating itself until we as the human race can stop labeling, self labeling, identifying others as 'bad' 'wrong' or 'crazy', just because they believe something different than us. #endofsoapbox

They feel that abstaining from food is a way to practice discipline and restrain for the human desires of this life. Muslims believe (similar to Mormon beliefs) that the body is a vessel that was given to us by God to allow our spirits (or celestial bodies) come to Earth and be tested with all the associated trials that come with being human. (We are spiritual beings having an earthly experience, not the other way around). So in a way, it is their way of proving to God that they are focused on improving their spirituality & hope (if done correctly & with true intent of the heart) that he will accept their fast. In accepting their fast, they will be rewarded when their life is over. It is also a way for Muslims to appreciate all that God has given them, to feel what it is like to be hungry and thirsty all day; so as to soften their hearts to the hungry and sick. Which strengthens empathy, which in my opinion is something we definitely need more of in this world of ours.

6 - Are There Exceptions During Rhamadan?

There are those who are exempt of course!

Children generally don't participate until they hit puberty, but because most of them want to be 'a grown-up' they end up at least doing a meal or two with their family.

Those on menstrual cycles & women during childbirth

The elderly or those with health problems

My thoughts: totally reasonable, and glad there are exceptions honestly, and after researching it, these individuals have the option to just go and feed the poor one meal a day for each day of the fast to substitute for what they can't do themselves.

7 - There Are Six Things That Make Fasting Invalid

If someone eats or drinks due to forgetfulness, a mistake, or coercion, then his fast is still valid and should continue to fast.

If you choose to eat or drink, for any reason, then your fast will become invalid.

My thought: reasonable, as a Mormon we fast once a month at the beginning of the week, with the same idea.

If one is overcome by the urge to vomit, and vomits unintentionally, then he should continue to fast.

My thought: well who would want to eat anyway if they are vomiting.

If someone chooses to vomit, for any reason, then his fast will become invalid.

If one has sexual intercourse while fasting, then he must perform kaffaarah, expiation of the sin. (Fasting continuously for sixty days or if unable then one should feed sixty poor people).

My thought: women will love this idea, lol, but if you think about it, sex puts your mind into a dirty lustful place. So if the idea is to clear the mind and have it more in-line with the thoughts of God; well abstaining from sex is likely not the best thing to be doing during your Holy month.

The fast becomes invalid during menstrual or post-childbirth bleeding. Even if such bleeding begins just before sunset, the fast of that day is invalid and the day must be made up at a later time.

My thought: this was a little irritating to me, mostly because I hate my menstrual cycle and don't feel women should have to fast longer because they are on the cycle. But on the flip side of this thought, its likely better to not fast when you are on your menstrual cycle and just delay it, because you are likely to already be bitchy & then to add Hangry on top of that --- well there would be no more Muslim men left if they had this deadly combination. Just my opinion, take it or leave it. Regarding Childbirth, I totally agree, no woman should be fasting when growing a human being in their belly; it would be harmful for the child.

8 - The Three Day Festival Is Amazing

The Holy month of Rhamadan ends with a 3 day festival (massive amount of food and several parties) called Eid el-fatir. And who doesn't love a party ;) In the end I came to appreciate a small part of what makes up Islam and its people, and have learned so much from my friends who are part of this religion.

I haven't met one Muslim yet who hasn't been warm, kind, inviting, and patient with me and my questions (which at times I know were slightly rude and racist-- my apologizes).

So as with anything in our lives, if you are afraid of it, seek first to understand -- and in the end you will be able to make a very personal & educated decision on if those fears you had were founded or not. It is ok to disagree, it is ok to get angry at the attacks that are happening by these terrorists & protect your lives/livelihood and families; but its not ok to lump an entire religion into one package.

So my takeaway? Its a month of reflection, giving thanks, abstaining from our animalistic human natures & coming closer to our divine nature. Developing our spiritual selves, helping those that are less fortunate & remembering the history of how human kind was drastically changed by a book called the Quran.

I have tried the 'give up something for lent' & now after studying and reading all of this (ok and participating in some of the parties associated with this), I might just have to give it a try in my own way. Focusing on my spiritual side and realizing that I am a spiritual being having an earthly experience.

I hope that this article has been informative to those not of the Islamic faith, and I truly hope my Muslim friends feel I have given honest opinions in a way that has not offended them or what they believe, to you I say Rhamadan Murbarak & Rhamadan Kareem :)

Rhamadan Murbarak (Congratulations its Rhamadan, or congrats on the month of blessings for this month)

Rhamadan Kareem (Have a generous Rhamadan, or generous in the way of have generous blessings from God this month)