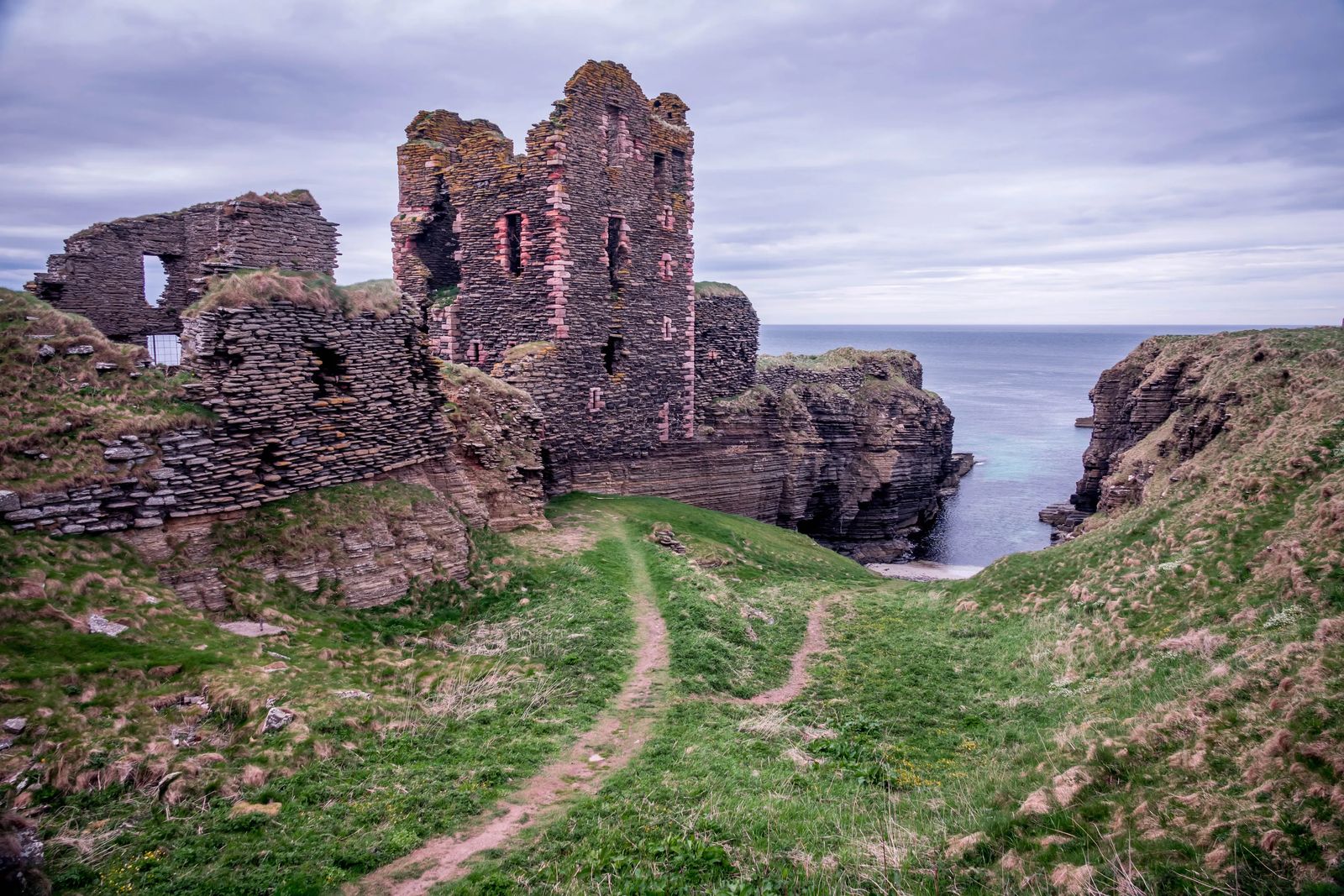 Situated on the cliffs of Caithness stood the main castles of the powerful Sinclair family for over 300 yrs. This 14th-century building was built upon by the Sinclair family for nearly 200 years. Then the wicked 5th Earl George Sinclair was constantly bickering with his neighbors the Clan Gun. This eventually led to an attack that lasted as a 12-day siege attempt until they finally withdrew. The Earl was forced to flee Sinclair Grinigoe Castle because of the mounting debts he had accumulated. 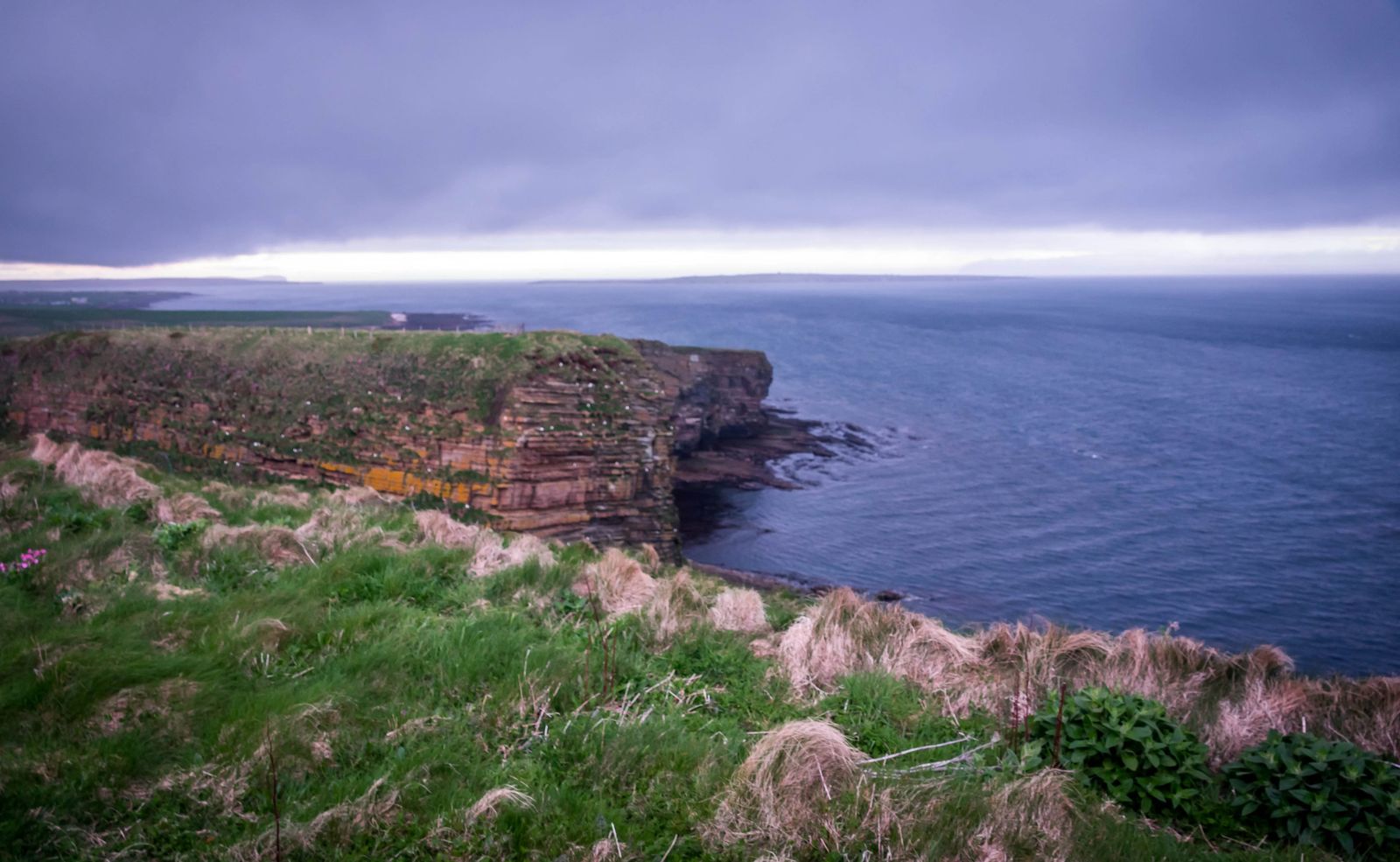 In 1651 Oliver Cromwell (an English Lord) moved in with his men resulting in massive damage to the castle from all the skirmishes and squabbles between the English regiment and the local clans.

The English troops were run out of the castle, and the 6th Earl sold the castle to Sir John Campbell of Glenorchy. George Sinclair claimed the castle should have been passed to him, so he went in with a band of loyalist and removed all furniture, flooring, doors and the roof. 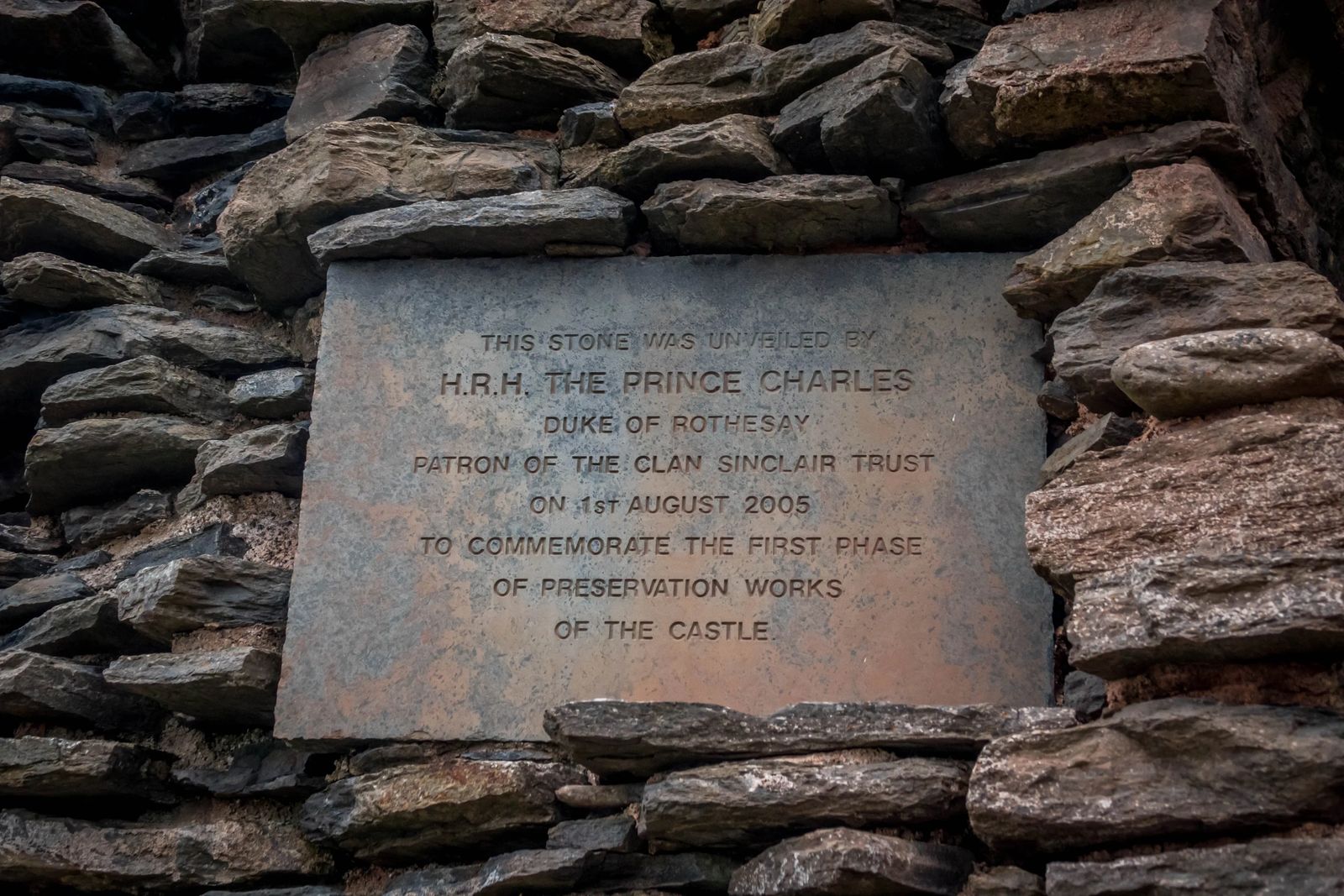 The last battle over the castle right was at Altimarlach where the Campbells emerged triumphant. In 1681 the Sinclairs regained the Earldom after which the castle fell into disrepair. The battering of the waves and ocean wind took the castle down stone by stone. Parts of the castle have since fallen into the sea.

A Sinclair family charity has taken over on rebuilding the castle to it’s former glory which is ongoing and arduous. Located on the narrow peninsula of Sinclair Bay and the North Sea is the only castle in Scotland listed on the World Monuments Fund list as one of the 100 most endangered heritage sites in the world. 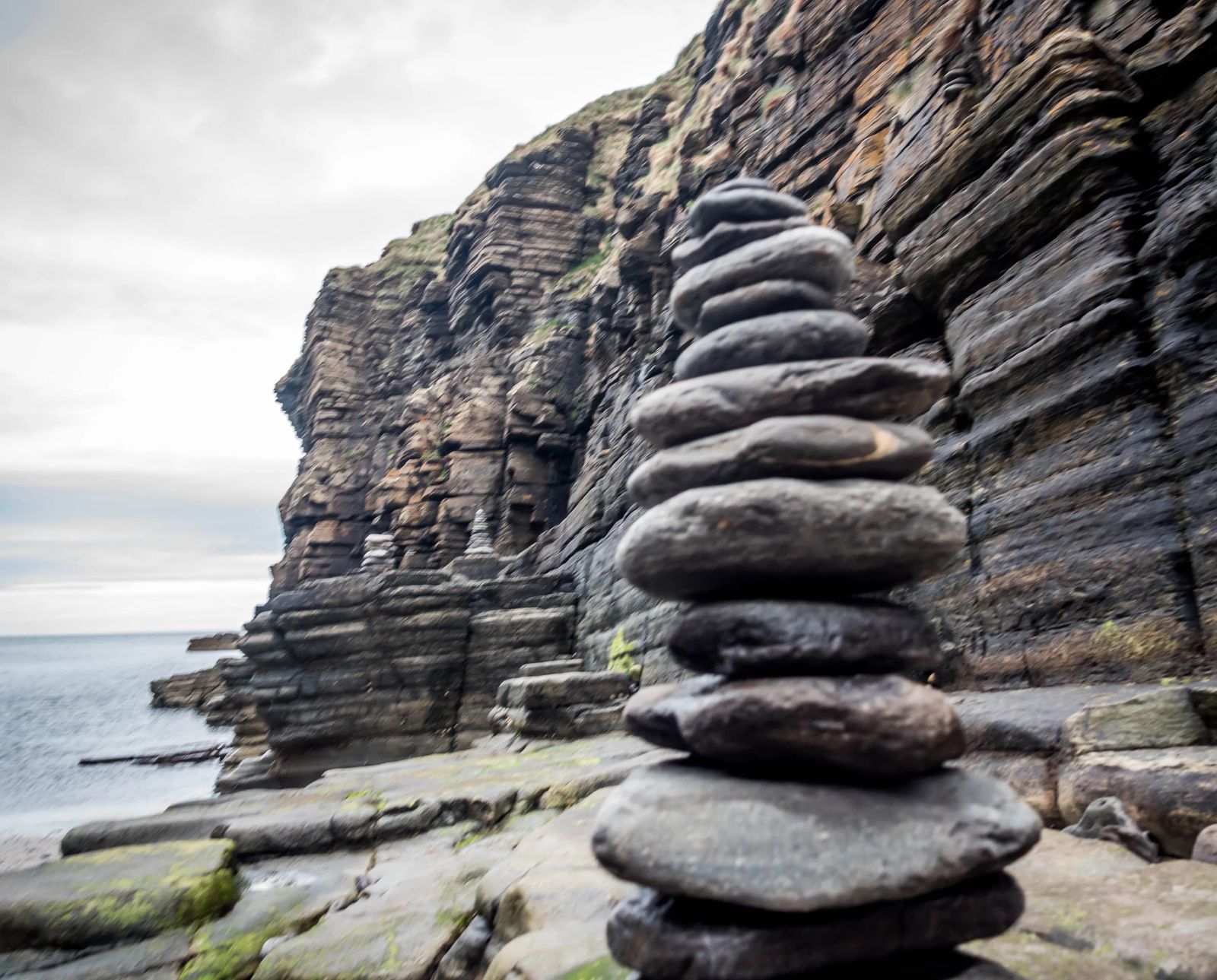 There is a stony passage that you walk into the main courtyard of the buildings. There was was a drawbridge over a once internal dry moat of the tower house. This tower house rises three stories from the bottom, you can find the remains of the tower house on the east side of the courtyard.

If you follow the remnants of the buildings to the edge of the cliff face, you will find a windows with a view of the sea beyond. There is also a stony staircase that descends to a secure area that was used to enter the castle, but yet protected from direct enemy fire (also called a sally point). 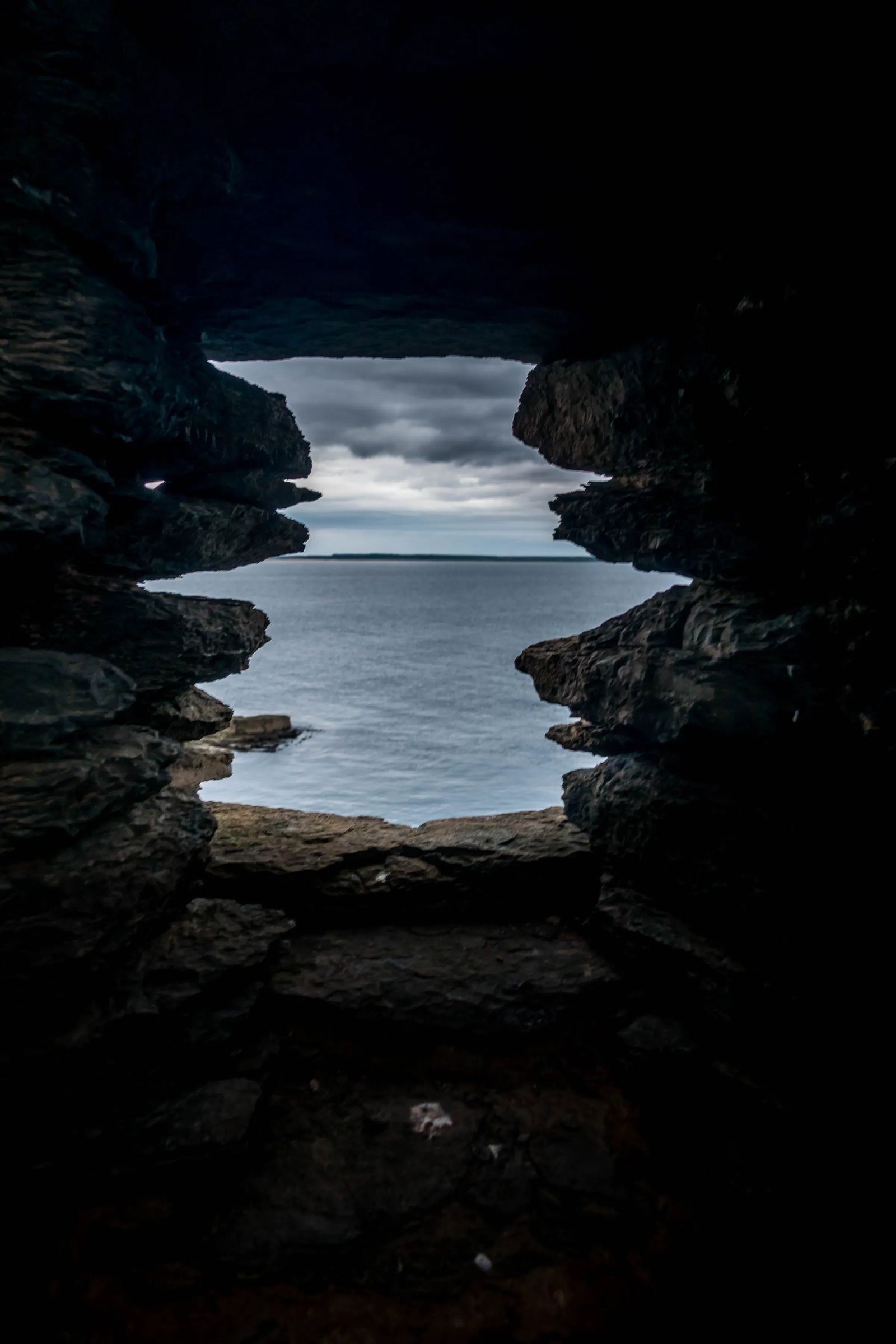 The stories of this castle say that the Sinclair portion of the castle, was built for the beautification, and the Girnigoe portion was built for the fortification and strength of the castle. The Girnigoe portion is considered the Tower House, the West gate and the chimney stack are considered the Sinclair portion. While some historians dispute that there was ever two different castles built, it has been called Castle Sinclair Girnigoe for the last 300 years despite a parliamentary declaration it should just be called Castle Sinclair.

The main buildings that you see today are under preservation and reconstruction, but the original tower was built around the 15th-century. Be sure to take a photo of the plaque that deems this so, and what historians base the dating of the castle off of. 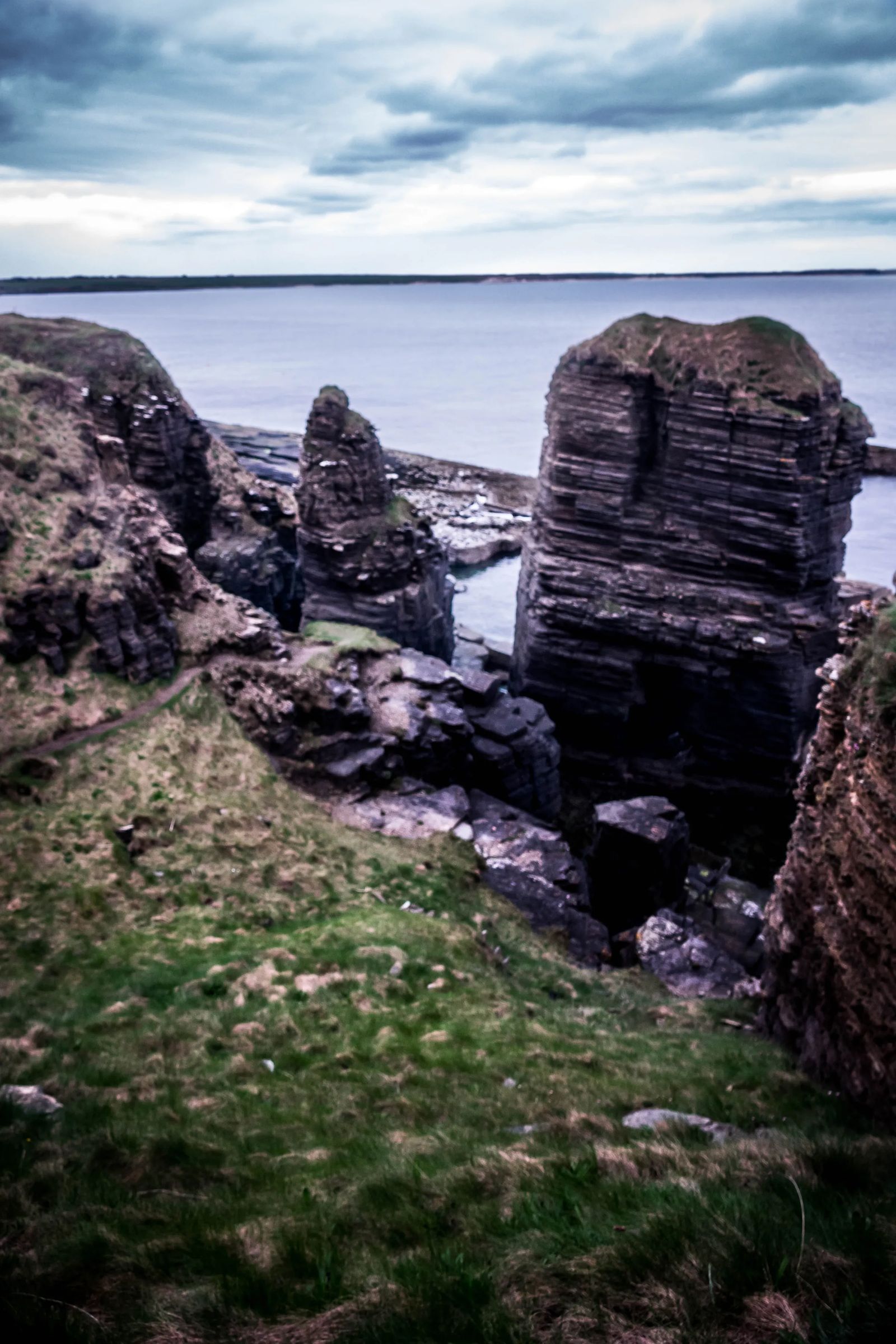 The rocks themselves are built from red sand stone rock and Cathiness slate, giving it a beautiful complimentary coloring to the green grasses surrounding it.

The most unique part of this castle is that it is the only castle in Scotland that is listed on the World Monuments Fund. This deems this castle as
one of the 100 Most Endangered Sites in the World. 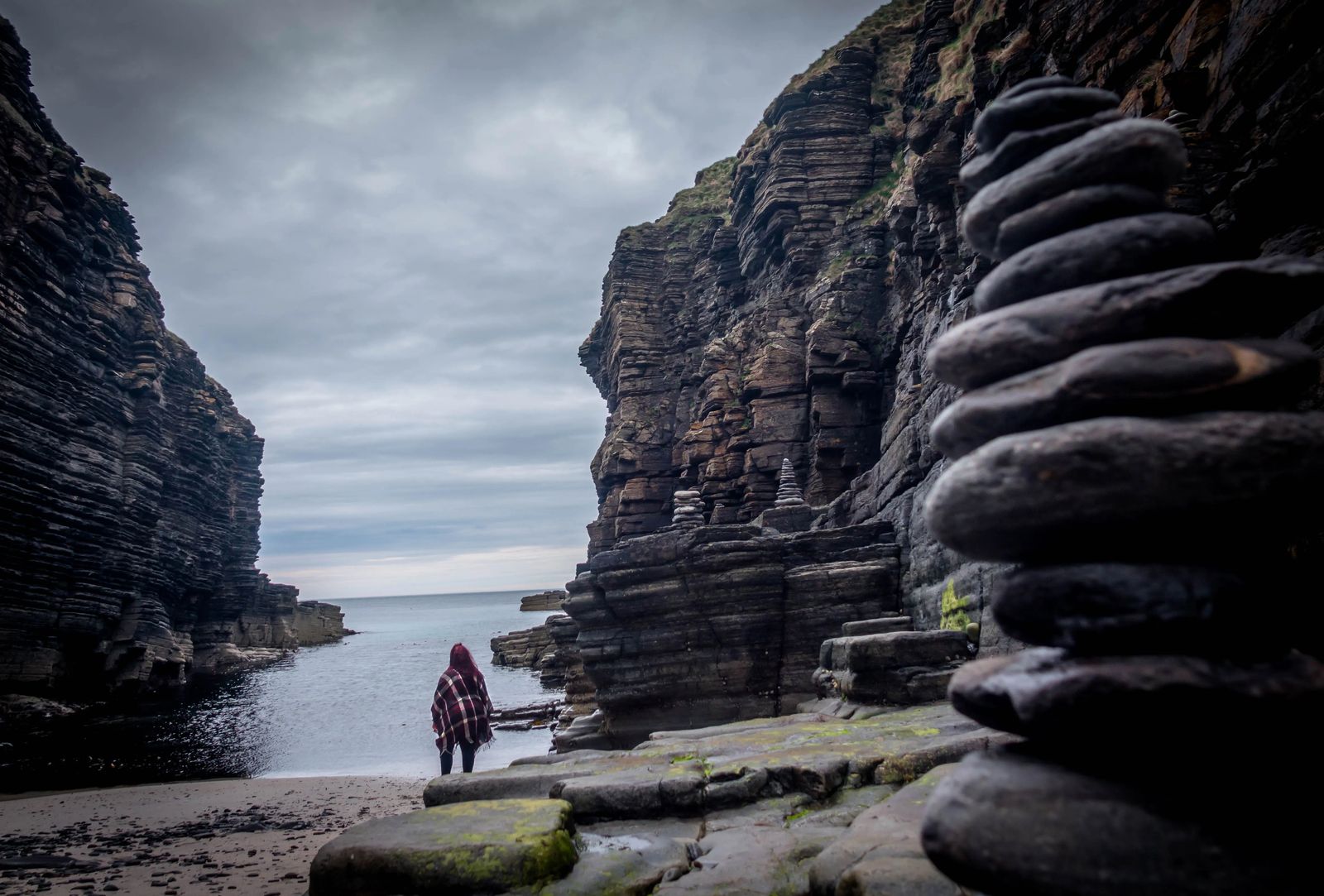 The Sea inlet Goe, is a Norse word meaning a rocky inlet. When you approach the castle, it is not immediately visible, but creates a natural barricade to entering the castle.

Walking near the inlet is not safe, so please don't attempt it as it is a far drop onto the rocky ground below. Looking down into the inlet, you see that it is covered in perfectly rounded black rocks with a beautifully contrasting white beach at the bottom. I imagined it was the perfect area for docking rowboats from the storms that frequent this area of Scotland. 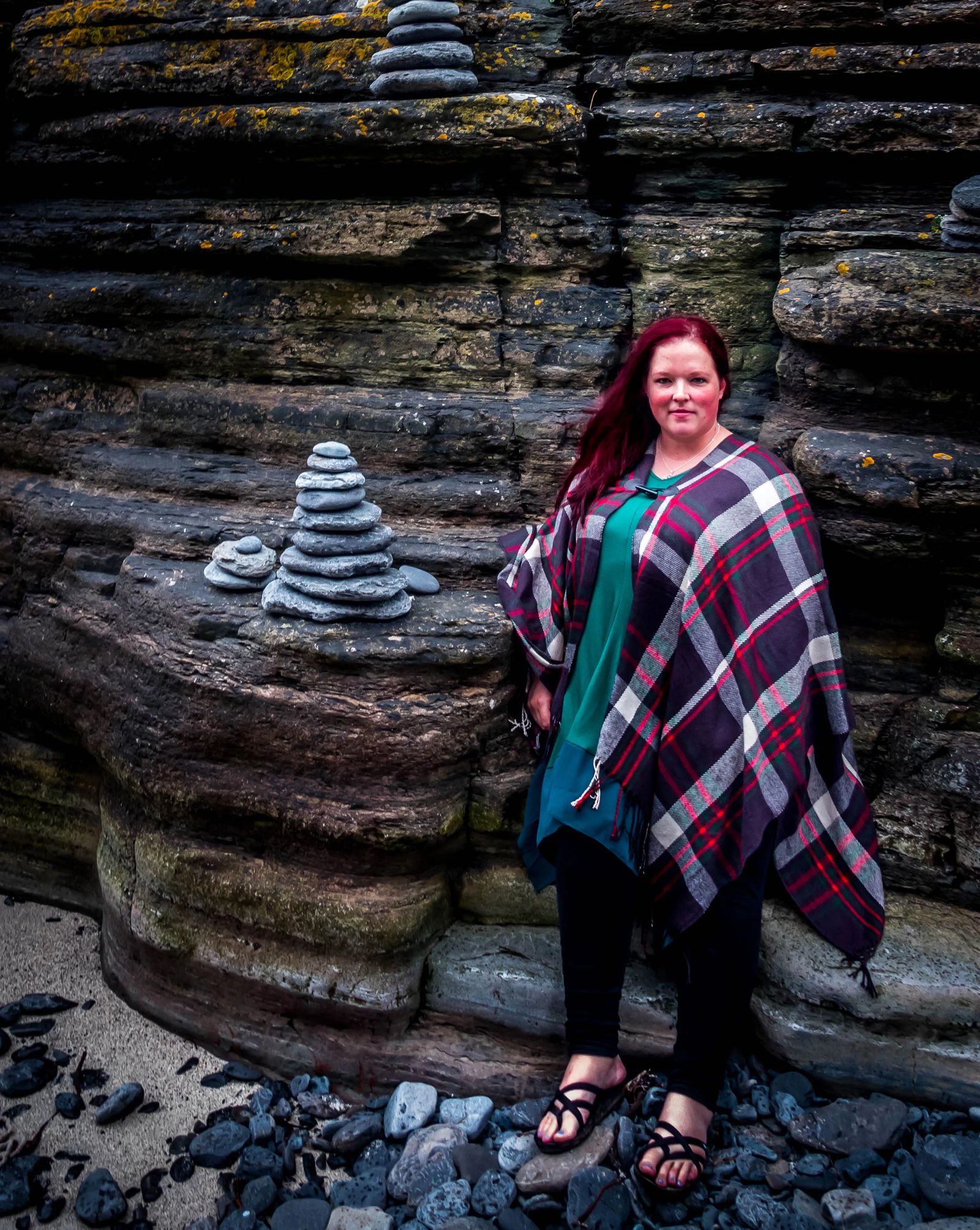 Where is Sinclair Girnigoe Castle Located?

The castle is separated from the mainland by an arm of the sea known as goe, a norse word meaning cave. There is a dry moat on one side which allows for a drawbridge, and added protection for the castle from mainland attacks.

Sinclair Girnigoe Castle GPS coordinates, 58°28'33.0"N 3°03'29.0"W, were extremely helpful when making our way there. If you have AT&T you won't get great service in this corner of the world, but those with T-mobile do get better service so using google maps is an option. Another option is to download the google map onto your phone for this area, to be able to use it offline. 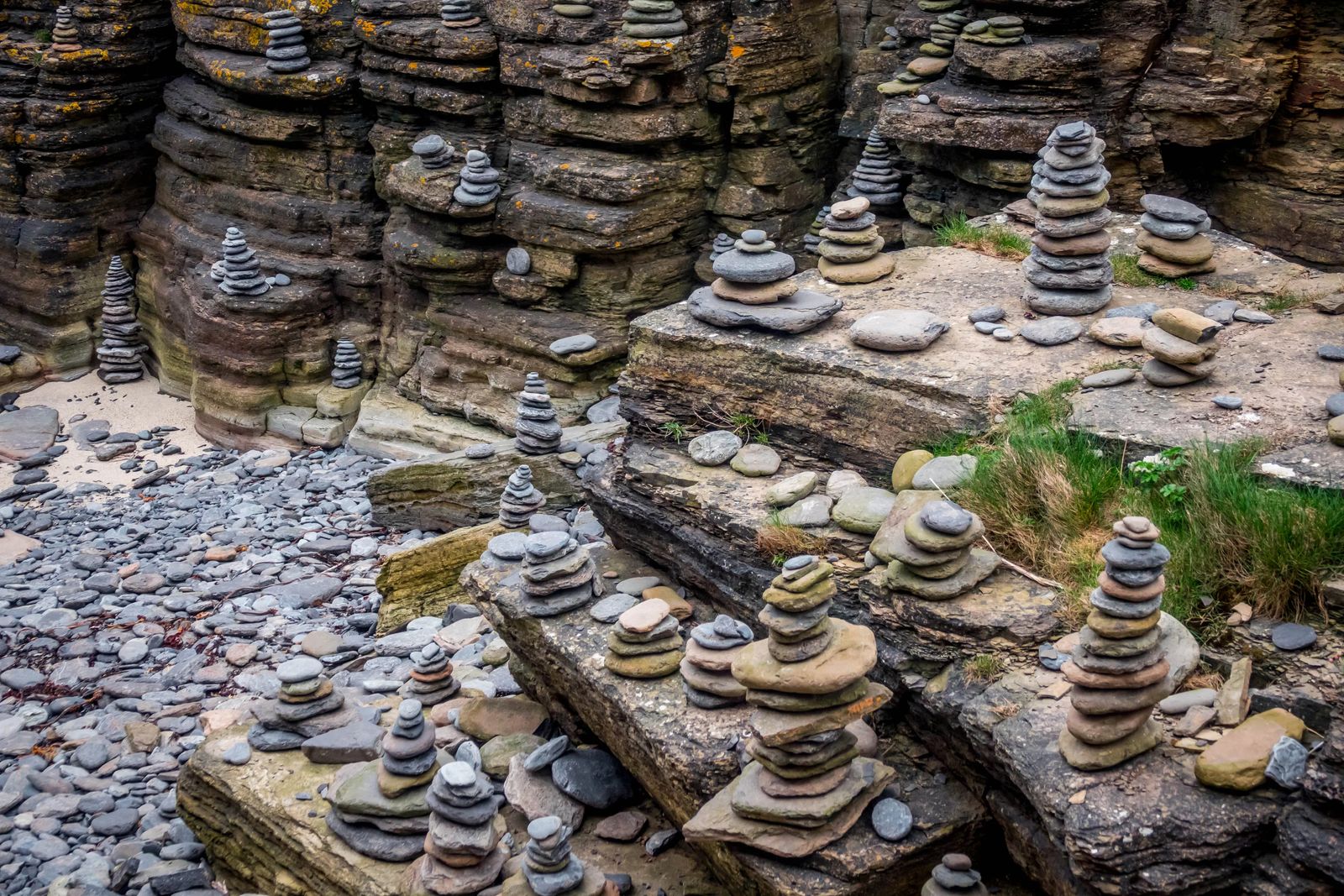 This is surely not a castle to be missed while traveling the NC500. I know that visiting every castle in the UK can be not only daunting, but by the end tiresome. This is one that is quite unique due to being on the edge of the northern most point of the UK and it is easy to imagine how life would have been in the castle. So when you visit Scotland be sure to slip this castle into your itinerary.

How to Get to Sinclair Girnigoe Castle

Take the road north of Wick headed towards Noss Head. Park at the large parking area before the Noss Head Lighthouse and follow the sign post to the castle along the path.

It is about a 15-20 minute walk along a gated road to the castle itself. The castle ruins seem safe and stable as long as you do not cross the safety ropes, lines, or gates.

There are some signs at the castle itself with historical information. There no signs that point to the castle. So utilizing the GPS coordinates above is a great way to navigate there.

Where to Stay near Sinclair Girnigoe Castle